Items related to The Brothers Karamazov 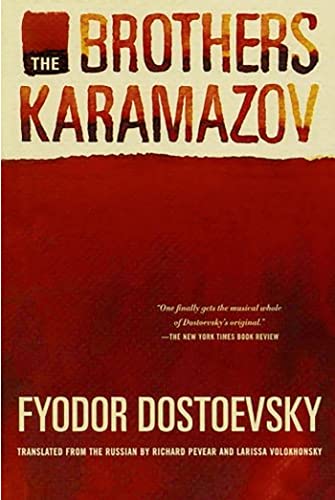 This award-winning translation by Richard Pevear and Larissa Volokhonsky remains true to the verbal
inventiveness of Dostoevsky’s prose, preserving the multiple voices, the humor, and the surprising modernity of the original. It is an achievement worthy of Dostoevsky’s last and greatest novel.

ation by Richard Pevear and Larissa Volokhonsky. This acclaimed new English version of Dostoevsky's last novel does justice to all its levels of artistry and intention.

Fyodor Dostoevsky was a Russian novelist and writer of fiction whose works, including Crime and Punishment and The Brothers Karamazov, have had a profound and lasting effect on intellectual thought and world literature.

Richard Pevear and Larissa Volokhonsky were awarded the PEN/ Book-of-the-Month Translation Prize for The Brothers Karamazov and have also translated Dostoevsky's Crime and Punishment, Notes from Underground, Demons, and The Idiot.