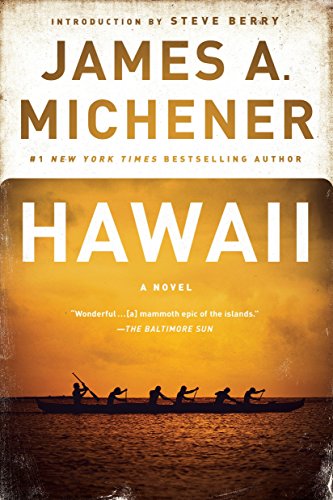 Pulitzer Prize–winning author James A. Michener brings Hawaii’s epic history vividly to life in a classic saga that has captivated readers since its initial publication in 1959. As the volcanic Hawaiian Islands sprout from the ocean floor, the land remains untouched for centuries—until, little more than a thousand years ago, Polynesian seafarers make the perilous journey across the Pacific, flourishing in this tropical paradise according to their ancient traditions. Then, in the early nineteenth century, American missionaries arrive, bringing with them a new creed and a new way of life. Based on exhaustive research and told in Michener’s immersive prose, Hawaii is the story of disparate peoples struggling to keep their identity, live in harmony, and, ultimately, join together.

“Wonderful . . . [a] mammoth epic of the islands.”—The Baltimore Sun

“One novel you must not miss! A tremendous work from every point of view—thrilling, exciting, lusty, vivid, stupendous.”—Chicago Tribune

“From Michener’s devotion to the islands, he has written a monumental chronicle of Hawaii, an extraordinary and fascinating novel.”—Saturday Review

“Memorable . . . a superb biography of a people.”—Houston Chronicle

In Hawaii, Pulitzer Prize–winning author James Michener weaves the classic saga that brought Hawaii’s epic history vividly alive to the American public on its initial publication in 1959, and continues to mesmerize even today.

The volcanic processes by which the Hawaiian Islands grew from the ocean floor were inconceivably slow, and the land remained untouched by man for countless centuries until, little more than a thousand years ago, Polynesian seafarers made the perilous journey across the Pacific and discovered their new home. They lived and flourished in this tropical paradise according to their ancient traditions and beliefs until, in the early nineteenth century, American missionaries arrived, bringing a new creed and a new way of life to a Stone Age society. The impact of the missionaries had only begun to be absorbed when other national groups, with equally different customs, began to migrate in great numbers to the islands. The story of modern Hawaii, and of this novel, is one of how disparate peoples, struggling to keep their identity yet live with one another in harmony, ultimately joined together to build America’s strong and vital fiftieth state.

“One novel you must not miss! A tremendous work from every point of view—thrilling, exciting, lusty, vivid, stupendous.” —Chicago Tribune

“A memorable novel, a superb biography of a people.”—Houston Chronicle