Items related to The Pelican Brief 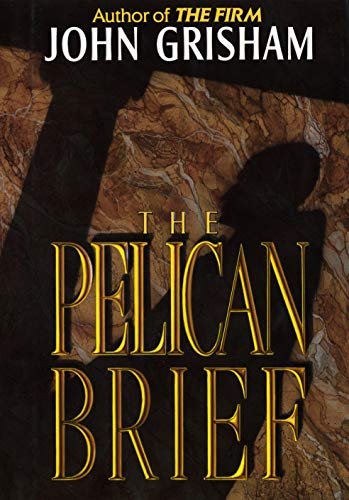 In suburban Georgetown a killer's Reeboks whisper  on the front floor of a posh home... In a seedy  D.C. porno house a patron is swiftly garroted to  death... The next day America learns that two of its  Supreme Court justices have been assassinated. And  in New Orleans, a young law student prepares a  legal brief... To Darby Shaw it was no more than a  legal shot in the dark, a brilliant guess. To the  Washington establishment it was political dynamite.  Suddenly Darby is witness to a murder -- a murder  intended for her. Going underground, she finds  there is only one person she can trust -- an  ambitious reporter after a newsbreak hotter than Watergate  -- to help her piece together the deadly puzzle.  Somewhere between the bayous of Louisiana and the  White House's inner sanctums, a violent cover-up is  being engineered. For somone has read Darby's  brief. Someone who will stop at nothing to destroy the  evidence of an unthinkable crime.

Anthony Heald gives an uncommonly compelling performance narrating this fast-paced legal thriller. The action begins with the fierce assassinations of two Supreme Court justices. Too unlikely to be coincidental, the murders have no identifiable connection until a young law student uncovers a hidden link, exposing herself and those around her to deadly consequences. Heald uses the flexibility of his voice to conjure up a large cast of diverse characters. He crafts his delivery expertly, heightening the already substantial suspense and carrying the story to its dramatic conclusion. (Running time: 6 hours, 4 cassettes) --George Laney

"A fast-paced thriller... it's got the unmistakable Grisham style -- conspiracy in high places, evil and innocent lawyers, assassins and a plot that will keep you reading into the small hours of the morning." -- The Cincinnati Post.