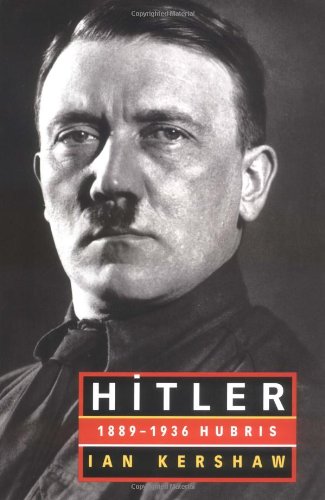 Hailed as the most compelling biography of the German dictator yet written, Ian Kershaw's Hitler brings us closer than ever before to the heart of its subject's immense darkness.

From his illegitimate birth in a small Austrian village to his fiery death in a bunker under the Reich chancellery in Berlin, Adolf Hitler left a murky trail, strewn with contradictory tales and overgrown with self-created myths. One truth prevails: the sheer scale of the evils that he unleashed on the world has made him a demonic figure without equal in this century. Ian Kershaw's Hitler brings us closer than ever before to the character of the bizarre misfit in his thirty-year ascent from a Viennese shelter for the indigent to uncontested rule over the German nation that had tried and rejected democracy in the crippling aftermath of World War I. With extraordinary vividness, Kershaw recreates the settings that made Hitler's rise possible: the virulent anti-Semitism of prewar Vienna, the crucible of a war with immense casualties, the toxic nationalism that gripped Bavaria in the 1920s, the undermining of the Weimar Republic by extremists of the Right and the Left, the hysteria that accompanied Hitler's seizure of power in 1933 and then mounted in brutal attacks by his storm troopers on Jews and others condemned as enemies of the Aryan race. In an account drawing on many previously untapped sources, Hitler metamorphoses from an obscure fantasist, a "drummer" sounding an insistent beat of hatred in Munich beer halls, to the instigator of an infamous failed putsch and, ultimately, to the leadership of a ragtag alliance of right-wing parties fused into a movement that enthralled the German people.

This volume, the first of two, ends with the promulgation of the infamous Nuremberg laws that pushed German Jews to the outer fringes of society, and with the march of the German army into the Rhineland, Hitler's initial move toward the abyss of war.

Noted for his excellent structural explanation of the Third Reich's political culture in The Hitler Myth, eminent historian Ian Kershaw shifts approach in this innovative biography of the Nazi tyrant. The first of a two-volume study, Hubris is far from a simple rehearsal of "great man" history, impressively exploring the historical forces that transformed a shiftless Austrian daydreamer into a dictator with immense power.

In his forthright introduction, Kershaw acknowledges that, as a committed social historian, he did not include biography in his original intellectual plans. However, his "growing preoccupation" with the structures of Nazi domination pushed him toward questions about Hitler's place and considerable authority within that system. He argues that the sources for Hitler's power must be sought not only in the dictator's actions but also (and more importantly) in the social circumstances of a nation that allowed him to overstep all institutional and moral barriers. In a comprehensive treatment of Hitler's life and times up through the remilitarization of the Rhineland in 1936, Kershaw draws from documents recently made available from Russian archives and benefits from a rigorous source criticism that has discredited many records formerly understood to be reliable. Hubris thus supplants Alan Bullock's classic Hitler: A Study in Tyranny as the definitive account of a man who, with characteristic smugness, indicated that it was a divinely inspired history that made him: "I go with the certainty of a sleep walker along a path laid out for me by Providence." Kershaw's penetrating analysis of how such a certain path could emerge from the dire circumstances of post World War I Germany is the abiding strength of Hubris. --James Highfill

Ian Kershaw is a professor of modern history at the University of Sheffield and the author of numerous works of history, including Hitler: A Biography, Fateful Choices and Hitler, the Germans, and the Final Solution. He lives in Manchester, England.