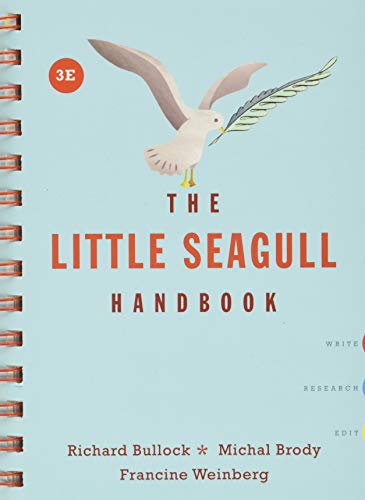 Most handbooks include chapters on various general writing topics (e.g., the writing process or the elements of an argument), but few cover the specific kinds of writing students are assigned to do. The Little Seagull has chapters on reports, analyses, and all the other genres that college students are most often assigned. And because it's so small, so easy to use, and so affordable, it's proven to be a popular alternative to larger (and much more costly) handbooks.

Richard Bullock (Ph.D., University of Virginia) is emeritus professor of English at Wright State University, where he directed the writing programs for twenty-eight years and designed the university's writing across the curriculum program and Introduction to College Writing Workshop. In 2012, he was awarded the Trustees' Award for Faculty Excellence, Wright State's highest honor. In addition to The Norton Field Guide to Writing, he is a coauthor of The Little Seagull Handbook.

Michal Brody is a linguist, independent scholar, and lecturer. She was a founding faculty member of the Universidad de Oriente in Yucatán, Mexico, and teaches now at Sonoma State University and San Francisco State University. Her scholarly work centers on language pedagogy and politics in the United States and Mexico. She’s the author (with Keith Walters) of What’s Language Got to Do with It? and coauthor (with Richard Bullock and Francine Weinberg) of The Little Seagull Handbook, and the editor of the Everyone’s an Author Tumblr site and They Say / I Blog.

Francine Weinberg (M.Ed, Teachers College, Columbia University) is an author and editor who has worked for more than thirty years on college and high school English textbooks. She is the author of the handbook in The Norton Field Guide to Writing and a coauthor of The Little Seagull Handbook.

Shipping: US$ 12.32
From United Kingdom to U.S.A.
Destination, rates & speeds

Shipping: US$ 18.49
From United Kingdom to U.S.A.
Destination, rates & speeds