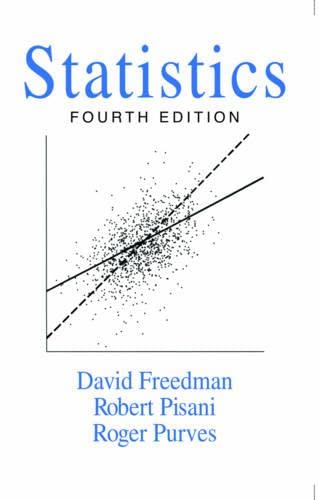 The Fourth Edition has been carefully revised and updated to reflect current data.

David Freedman received his B.Sc. from McGill and his Ph.D. from Princeton. He has worked as a consultant for the City of San Francisco, the County of Los Angeles, the U.S. Department of Energy, and the U.S. Department of Justice. He has written several previous books and numerous technical papers. He is a member of the American Academy of Arts and Sciences and teaches at the University of California, Berkeley.

Robert Pisani received his B.A. and Ph.D. at the University of California, Berkeley. His research interests include probability models of market-price behavior and the statistical valuation of financial instruments.

Book Description Softcover. Condition: New. Brand new book. This is an international edition textbook with identical content as the US version and is usually paperback bound instead of hardcover. We ship all our orders from CA/IL, USA (depending on your address) and NOT from Asia! Buy with confidence from a 5-star US based seller. Choose expedited shipping for superfast delivery with tracking. Seller Inventory # 70|9780393929720

Book Description Hardcover. Condition: new. Hardcover. The Fourth Edition has been carefully revised and updated to reflect current data. Renowned for its clear prose and no-nonsense emphasis on core concepts, Statistics covers fundamentals using real examples to illustrate the techniques. Shipping may be from multiple locations in the US or from the UK, depending on stock availability. Seller Inventory # 9780393929720