Items related to Song of Solomon 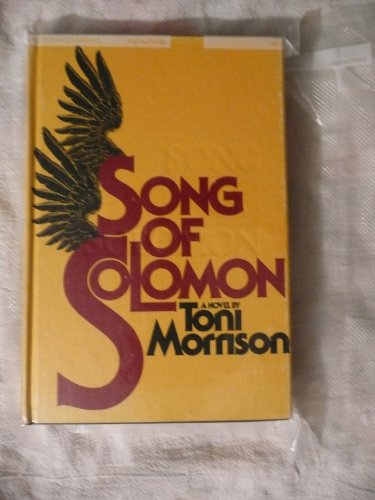 Toni Morrison's Song of Solomon, a novel of large beauty and power, creates a magical world out of four generations of black life in America, a world we enter on the day of the birth of Macon Dead, Jr. (known as Milkman), son of the richest black family in a mid-western town; the day on which the lonely insurance man, Robert Smith, poised in blue silk wings, attempts to fly from a steeple of the hospital, a black Icarus looking homeward...

We see Milkman growing up in his father's money-haunted, death-haunted house with his silent sisters and strangely passive mother, beginning to move outward--through his profound love and combat with his friend Guitar...through Guitar's mad and loving commitment to the secret avengers called the Seven Days...through Milkman's exotic, imprisoning affair with his love-blind cousin, Hagar...and through his unconscious apprenticeship to his mystical Aunt Pilate, who saved his life before he was born.

And we follow him as he strikes out alone; moving first toward adventure and then--as the unspoken truth about his family and his own buried heritage announces itself--toward an adventurous and crucial embrace of life.

This is a novel that expresses, with passion, tenderness, and a magnificence of language, the mysterious primal essence of family bond and conflict, the feelings and experience of all people wanting, and striving, to be alive.

Oprah Book Club® Selection, October 1996: In an effort to hide his Southern, working class roots, Macon Dead, an upper-class Northern black businessman, tries to insulate his family from the danger and despair of the rank and file blacks with whom he shares the neighborhood. The plan leads his son, "Milkman"--a named he earned after his mother nursed him well past the proper age--onto a path exactly opposite the one his father had hoped. Milkman is driven into the arms of a violent, lower-class woman, into a clandestine circle of blacks who repay white violence in kind and into an awareness that he can fulfill his own potential by understanding the mistakes of his ancestors as they relate to his own.

"A stunningly beautiful book . . . I would call the book poetry, but that would seem to be denying its considerable power as a story. Whatever name you give it, it's full of magnificent people, each of them complex and multilayered, even the narrowest of them narrow in extravagant ways."
--Anne Tyler
Washington Post Book World

"Morrison's prose is a delight, full of the lyrical variety and allusiveness that distinguish a rich folkloric tradition. Her real gift, though, is for characterization, and Song of Solomon is peopled with an amazing collection of losers and fighters, innocents and murderers, followers of ghosts and followers of money, all of whom add to the pleasure of this exceptionally diverse novel."
--The Atlantic Monthly

"Morrison moves easily in and out of the lives and thoughts of her characters, luxuriating in the diversity of circumstance and personality, and reveling in the sound of their voices and of her own, which echoes and elaborates theirs."
--The New Yorker

"Exuberant . . . An artistic vision that encompasses both a private and a national heritage."
--Time

"A fine novel exuberantly constructed . . . So rich in its use of common speech, so sophisticated in its use of literary traditions and language from the Bible to Faulkner . . . it is also extremely funny."
--The Hudson Review