Items related to Treachery in Death 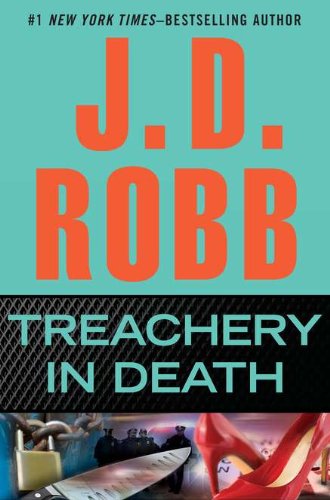 Detective Eve Dallas and her partner, Peabody, are following up on a senseless crime-an elderly grocery owner killed by three stoned punks for nothing more than kicks and snacks. This is Peabody's first case as primary detective-good thing she learned from the master.

But Peabody soon stumbles upon a trickier situation. After a hard workout, she's all alone in the locker room when the gym door clatters open; and-while hiding inside a shower stall trying not to make a sound-she overhears two fellow officers, Garnet and Oberman, arguing. It doesn't take long to realize they're both crooked-guilty not just of corruption but of murder. Now Peabody, Eve, and Eve's husband, Roarke, are trying to get the hard evidence they need to bring the dirty cops down-knowing all the while that the two are willing to kill to keep their secret.

In the latest from the #1 New York Times bestselling phenomenon, Eve Dallas tracks down those who break the law-including the ones sworn to uphold it.

J.D. Robb is the pseudonym for a number one New York Times bestselling author of more than 190 novels, including the futuristic suspense In Death series. There are more than 400 million copies of her books in print.

“The thin blue line has some major cracks in it in Robb’s latest outstanding thriller. Whodunit is never in question, rather the fun in this tale is the meticulous preparation and setting of a skillful trap. All the usual players are engaged and their talents cleverly utilized as Robb spins a fast-packed and exciting read!”—RT Book Reviews

“Warning: J. D. Robb’s In Death novels are highly addictive...Treachery in Death is a superb addition to the already brilliant In Death series. Another warning: once you start this book, you will not be able to put it down, so plan your reading accordingly.”—New York Journal of Books

More Praise for the In Death series

“Robb is a virtuoso.”—Seattle Post-Intelligencer

“Anchored by terrific characters, sudden twists that spin the whole narrative on a dime, and a thrills-to-chills ration that will raise the neck hairs of even the most jaded reader, the J. D. Robb books are the epitome of great popular fiction.”—New York Times bestselling author Dennis Lehane