Items related to Where the Red Fern Grows

Where the Red Fern Grows 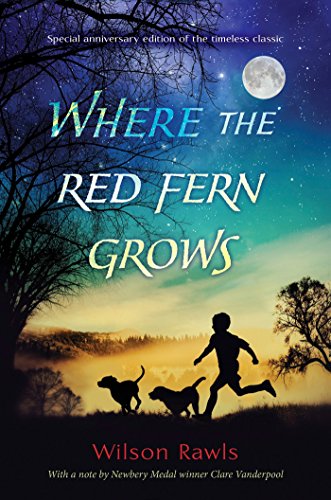 For fans of Old Yeller and Shiloh, Where the Red Fern Grows is a beloved classic that captures the powerful bond between man and man’s best friend. This special edition includes new material, including a note to readers from Newbery Medal winner and Printz Honor winner Clare Vanderpool, a letter from Wilson Rawls to aspiring writers, original jacket artwork, and more.

Billy has long dreamt of owning not one, but two dogs. So when he’s finally able to save up enough money for two pups to call his own—Old Dan and Little Ann—he’s ecstatic. It’s true that times are tough, but together they’ll roam the hills of the Ozarks.
Soon Billy and his hounds become the finest hunting team in the valley. Stories of their great achievements spread throughout the region, and the combination of Old Dan’s brawn, Little Ann’s brains, and Billy’s sheer will seems unbeatable. But tragedy awaits these determined hunters—now friends—and Billy learns that hope can grow out of despair.

Praise for Where the Red Fern Grows

“A rewarding book . . . [with] careful, precise observation, all of it rightly phrased....Very touching.” —The New York Times Book Review

“One of the great classics of children’s literature . . . Any child who doesn’t get to read this beloved and powerfully emotional book has missed out on an important piece of childhood for the last 40-plus years.” —Common Sense Media

“Written with so much feeling and sentiment that adults as well as children are drawn [in] with a passion.” —Arizona Daily Star

“It’s a story about a young boy and his two hunting dogs and . . . I can’t even go on without getting a little misty.” —The Huffington Post

“We tear up just thinking about it.” —Time on the film adaptation

Author Wilson Rawls spent his boyhood much like the character of this book, Billy Colman, roaming the Ozarks of northeastern Oklahoma with his bluetick hound. A straightforward, shoot-from-the-hip storyteller with a searingly honest voice, Rawls is well-loved for this powerful 1961 classic and the award-winning novel Summer of the Monkeys. In Where the Red Fern Grows, Billy and his precious coonhound pups romp relentlessly through the Ozarks, trying to "tree" the elusive raccoon. In time, the inseparable trio wins the coveted gold cup in the annual coon-hunt contest, captures the wily ghost coon, and bravely fights with a mountain lion. When the victory over the mountain lion turns to tragedy, Billy grieves, but learns the beautiful old Native American legend of the sacred red fern that grows over the graves of his dogs. This unforgettable classic belongs on every child's bookshelf. (Ages 9 and up)

This classic about a ten-year-old boy growing up in the Ozark mountains with his inseparable pair of coonhounds -- will warm the hearts of young and old alike. Winner of the Great Stone Face Award.

1. Where the Red Fern Grows

2. Where the Red Fern Grows

3. Where The Red Fern Grows

4. Where the Red Fern Grows

5. Where the Red Fern Grows (Hardback or Cased Book)

6. Where the Red Fern Grows

7. Where the Red Fern Grows

8. Where the Red Fern Grows

9. Where the Red Fern Grows

10. Where the Red Fern Grows