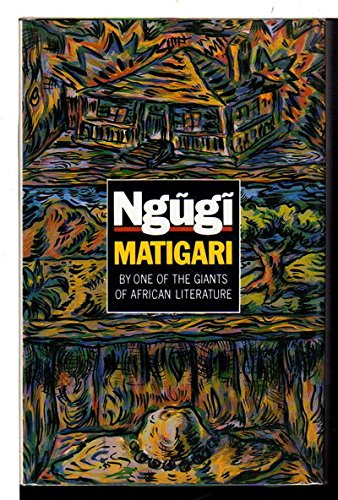 A moral fable in which Martigari, a freedom fighter, emerges from the forest in the political dawn of post-independence Kenya. Searching for his family and a new future, he finds little has changed.

"Ngugi wa Thiong'o has succeeded in creating a fascinating and revolutionary concept of genre... Matigari is both a novel at the same time as it is an oral narrative performance. [Matigari] is likewise equally a hagiography as it is a myth." - Lewis Nkosi

"Soon after Matigari's publication, its hero was mistaken by the paranoid, dictatorial government of Kenya as a revolutionary agitator plotting to overthrow the government, which promptly issued a warrant for his arrest! When the ensuing extensive search across the country finally revealed that Matigari was only a fictional hero, the book which had given birth to this phantom, this Matigari ... was immediately confiscated and banned from circulation." - F. Odun Balogun

Book Description Heinemann. Hardcover. Condition: Fair. A readable copy. All pages are intact, and the cover is intact. Pages can include considerable notes-in pen or highlighter-but the notes cannot obscure the text. At ThriftBooks, our motto is: Read More, Spend Less. Seller Inventory # G0435906542I5N00