Items related to The Godwulf Manuscript (Spencer, No. 1) (Spenser)

Parker, Robert B. The Godwulf Manuscript (Spencer, No. 1) (Spenser) 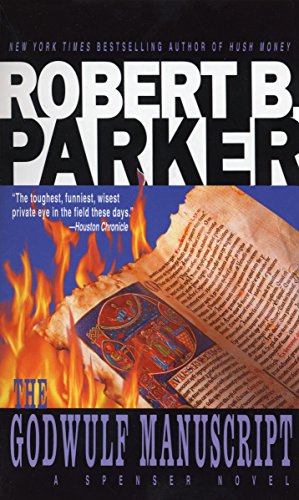 “The toughest, funniest, wisest, private eye in the field these days.”—Houston Chronicle

Spenser earned his degree in the school of hard knocks, so he is ready when a Boston university hires him to recover a rare, stolen manuscript. He is hardly surpised that his only clue is a radical student with four bullets in his chest.

The cops are ready to throw the book at the pretty blond coed whose prints are all over the murder weapon but Spenser knows there are no easy answers. He tackles some very heavy homework and knows that if he doesn't finish his assignment soon, he could end up marked “D”—for dead.

Robert B. Parker was the author of seventy books, including the legendary Spenser detective series, novels featuring Chief Jesse Stone, and the acclaimed Virgil Cole/Everett Hitch westerns, as well as the Sunny Randall novels. Winner of the Mystery Writers of America Grand Master Award and long considered the undisputed dean of American crime fiction, Parker died in January 2010.

The office of the university president looked like the front parlor of a successful Victorian whorehouse. It was paneled in big squares of dark walnut, with ornately figured maroon drapes at the long windows. There was maroon carpeting and the furniture was black leather with brass studs. The office was much nicer than the classrooms; maybe I should have worn a tie.

Bradford W. Forbes, the president, was prosperously heavy—reddish face; thick, longish, white hair; heavy white eyebrows. He was wearing a brown pin-striped custom-tailored three-piece suit with a gold Phi Beta Kappa key on a gold watch chain stretched across his successful middle. His shirt was yellow broadcloth and his blue and yellow striped red tie spilled out over the top of his vest.

As he talked, Forbes swiveled his chair around and stared at his reflection in the window. Flakes of the season’s first snow flattened out against it, dissolved and trickled down onto the white brick sill. It was very gray out, a November grayness that is peculiar to Boston in late fall, and Forbes’s office seemed cheerier than it should have because of that.

He was telling me about the sensitive nature of a college president’s job, and there was apparently a lot to say about it. I’d been there twenty minutes and my eyes were beginning to cross. I wondered if I should tell him his office looked like a whorehouse. I decided not to.

“Do you see my position, Mr. Spenser,” he said, and swiveled back toward me, leaning forward and putting both his hands palms down on the top of his desk. His nails were manicured.

“Yes, sir,” I said. “We detectives know how to read people.”

Forbes frowned and went on.

“It is a matter of the utmost delicacy, Mr. Spenser”—he was looking at himself in the glass again—“requiring restraint, sensitivity, circumspection, and a high degree of professionalism. I don’t know the kind of people who usually employ you, but ...”

“Look, Dr. Forbes, I went to college once, I don’t wear my hat indoors. And if a clue comes along and bites me on the ankle, I grab it. I am not, however, an Oxford don. I am a private detective. Is there something you’d like me to detect, or are you just polishing up your elocution for next year’s commencement?”

Forbes inhaled deeply and let the air out slowly through his nose.

“District Attorney Frale told us you were somewhat overfond of your own wit. Tell him, Mr. Tower.”

Tower stepped away from the wall where he had been leaning and opened a manila file folder. He was tall and thin, with a Prince Valiant haircut, long sideburns, buckle boots, and a tan gabardine suit. He put one foot on a straight chair and flipped open the folder, no nonsense.

“Carl Tower,” he said, “head of campus security. Four days ago a valuable fourteenth-century illuminated manuscript was stolen from our library.”

“What is an illuminated manuscript?”

Forbes answered, “A handwritten book, done by monks usually, with illustrations in color, often red and gold in the margins. This particular one is in Latin, and contains an allusion to Richard Rolle, the fourteenth-century English mystic. It was discovered forty years ago behind an ornamental façade at Godwulf Abbey, where it is thought to have been secreted during the pillage of the monasteries that followed Henry the Eighth’s break with Rome.”

“Oh,” I said, “that illuminated manuscript.”

“Right,” Tower said briskly. “I can fill you in with description and pictures later. Right now we want to sketch out the general picture. This morning President Forbes received a phone call from someone purporting to represent a campus organization, unnamed. The caller said they had a manuscript and would return it if we would give a hundred thousand dollars to a free school run by an off-campus group.”

I looked around. “Perhaps you could rent out the south end of your office for off-street parking,” I said.

Forbes closed his eyes for perhaps ten seconds, inhaled audibly, and then went on.

“All universities lose money. This one, large, urban, in some ways undistinguished, loses more than most. We have little alumni support, and that which we do have is often from the less affluent segments of our culture. We do not have one hundred thousand dollars.”

I looked at Tower. “Can the thing be fenced?”

“No, its value is historical and literary. The only market would be another university, and they would recognize it at once.”

“There is another problem, Mr. Spenser. The manuscript script must be kept in a controlled environment. Air-conditioned, proper humidity, that sort of thing. Should it be kept out of its case too long, it will fall apart. The loss to scholarship would be tragic.” Forbes’s voice sank at the last sentence. He examined a fleck of cigar ash on his lapel, then brought his eyes up level with mine and stared at me steadily.

“Win this one for the Gipper,” I said.

Behind me Tower gave a kind of snort, and Forbes looked as if he’d found half a worm in his apple.

“I’m thirty-seven years old and short on rah-rah, Dr. Forbes. If you’ll pay me, and do your Pat O’Brien impressions somewhere else, I’ll see if I can find the manuscript.”

“This gets us nowhere,” Tower said. “Let me take him down to my office, Dr. Forbes, and lay it all out for him. I know the situation and I’m used to dealing with people like him.”

Forbes nodded without speaking. As we left the office he was standing at his window, hands clasped behind his back, looking at the snow.

The administration building was cinder block, with vinyl tile, frosted glass partitions, two tones of green on the corridor walls. Tower’s office was six doors down from Forbes’s and not much bigger than Forbes’s desk. It was done in beige metal. Tower got seated behind his desk and tapped his teeth with a pencil.

“It’s really slick how you can charm a client, Spenser.”

I sat across from him in the other chair. I didn’t say anything.

“Sure,” he said, “the old man’s kind of a ham, but he’s a damn good administrator, and a damn fine person.”

“Okay,” I said, “he’s terrific. When I grow up I want to be just like him. What about the Godwulf Manuscript?”

“Right.” He took an eight-by-ten color print from his manila folder and handed it to me. It showed an elegantly handwritten book lying open on a table. The words were in Latin and around the margins in bright red and gold were drawn knights and ladies and lions on their hind legs, and vines and stags and a serpentine dragon being lanced by an armor-clad hero on a plump and feminine horse. The first letter at the top left on each page was elaborately drawn and incorporated into the design of the margins.

It was taken three nights ago from its case in the library’s rare book room. The watchman punched in there at two and again at four. At four he found the case open and the manuscript gone. He can’t say positively that it wasn’t there at two, but he assumes he would have noticed. It’s hard to prove you didn’t see something. You want to talk to him?”

“No,” I answered. “That’s routine stuff. You or the cops can do that as well as I could. Have you got a suspect?”

“Student Committee Against Capitalist Exploitation. Revolution at the far-left fringe of the spectrum. I don’t know it the way courts want it known; I know it the way you know things like that if you’re in my line of work.”

“Not really, though I’ve got some contacts. Mostly, though, it’s a gut guess. It’s the kind of thing they’d do. I’ve been here for five years. Before that I was with the Bureau for ten. I’ve spent a lot of time on radicals, and I’ve developed a feel for them.”

“Like the late director developed a feel for them?”

“Hoover? No, he’s one reason I quit the Bureau. He was a hell of a cop once, but his time came and went before he died. I got enough feel about the radical kids not to classify them. The worst of them have the same things wrong that zealots always have, but you can’t blame them for getting rigid about some of the things that go on. That ain’t Walt Disney World out there.” He nodded out his window at the blacktop quadrangle where the slush was beginning to collect in semi-fluid patterns as the kids sloshed through it. A thin and leafless sapling leaned against its support stake. It was a long way from home.

Book Description Paperback. Condition: New. Reprint. Language: English. Brand new Book. New York Times bestselling author of the Spenser series of crime thrillers--Book 1 in the series "The toughest, funniest, wisest, private eye in the field these days."--Houston ChronicleSpenser earned his degree in the school of hard knocks, so he is ready when a Boston university hires him to recover a rare, stolen manuscript. He is hardly surpised that his only clue is a radical student with four bullets in his chest. The cops are ready to throw the book at the pretty blond coed whose prints are all over the murder weapon but Spenser knows there are no easy answers. He tackles some very heavy homework and knows that if he doesn't finish his assignment soon, he could end up marked "D"--for dead. Seller Inventory # ABZ9780440129615