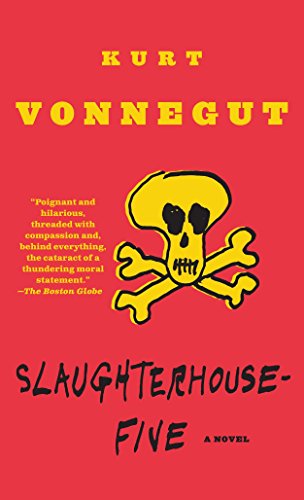 Slaughterhous-Five is one of the world's great anti-war books. Centering on the infamous fire-bombing of Dresden, Billy Pilgrim's odyssey through time reflects the mythic journey of our own fractured lives as we search for meaning in what we are afraid to know.

Kurt Vonnegut's absurdist classic Slaughterhouse-Five introduces us to Billy Pilgrim, a man who becomes unstuck in time after he is abducted by aliens from the planet Tralfamadore. In a plot-scrambling display of virtuosity, we follow Pilgrim simultaneously through all phases of his life, concentrating on his (and Vonnegut's) shattering experience as an American prisoner of war who witnesses the firebombing of Dresden.

Don't let the ease of reading fool you--Vonnegut's isn't a conventional, or simple, novel. He writes, "There are almost no characters in this story, and almost no dramatic confrontations, because most of the people in it are so sick, and so much the listless playthings of enormous forces. One of the main effects of war, after all, is that people are discouraged from being characters..." Slaughterhouse-Five (taken from the name of the building where the POWs were held) is not only Vonnegut's most powerful book, it is as important as any written since 1945. Like Catch- 22, it fashions the author's experiences in the Second World War into an eloquent and deeply funny plea against butchery in the service of authority. Slaughterhouse-Five boasts the same imagination, humanity, and gleeful appreciation of the absurd found in Vonnegut's other works, but the book's basis in rock-hard, tragic fact gives it a unique poignancy--and humor.

Kurt Vonnegut was a master of contemporary American literature. His black humor, satiric voice, and incomparable imagination first captured America's attention in The Sirens of Titan in 1959 and established him as "a true artist" with Cat's Cradle in 1963. He was, as Graham Greene declared, "one of the best living American writers.” Mr. Vonnegut passed away in April 2007.


From the Hardcover edition.

Book Description Bantam Doubleday Dell Publishing Group Inc, United States, 1998. Paperback. Condition: New. Repr. Language: English. Brand new Book. "A desperate, painfully honest attempt to confront the monstrous crimes of the twentieth century."--Time Selected by the Modern Library as one of the 100 best novels of all time Slaughterhouse-Five, an American classic, is one of the world's great antiwar books. Centering on the infamous World War II firebombing of Dresden, the novel is the result of what Vonnegut describes as a twenty-three-year struggle to write a book about what he himself witnessed as an American prisoner of war. It combines science fiction, autobiography, humor, historical fiction, and satire in an account of the life of Billy Pilgrim, a barber's son turned draftee turned optometrist turned alien abductee. Billy, like Vonnegut, experiences the destruction of Dresden as a POW, and, as with Vonnegut, it is the defining moment of his life. Unlike the author, he also experiences time travel, or coming "unstuck in time." Billy Pilgrim's odyssey reflects the mythic journey of our own fractured lives as we search for meaning in what we fear most. Praise for Slaughterhouse-Five "Poignant and hilarious, threaded with compassion and, behind everything, the cataract of a thundering moral statement."--The Boston Globe "Very tough and very funny . . . sad and delightful . . . very Vonnegut."--New York Times "Splendid art . . . a funny book at which you are not permitted to laugh, a sad book without tears."--Life. Seller Inventory # ABZ9780440180296

4. Slaughterhouse-Five: Or the Children's Crusade, a Duty-Dance with Death (Paperback or Softback)

6. Slaughterhouse-Five: Or the Children's Crusade, a Duty-Dance with Death (Mass Market Paperback)

Book Description Dell, 1991. Mass Market Paperback. Condition: New. Mass Market Paperback. Slaughterhous-Five is one of the world's great anti-war books. Centering on the infamous fire-bombing of Dresden, Billy Pilgrim's odyssey through time reflects the my.Shipping may be from multiple locations in the US or from the UK, depending on stock availability. 224 pages. 0.110. Seller Inventory # 9780440180296

9. Slaughterhouse-Five: A Duty Dance With Death