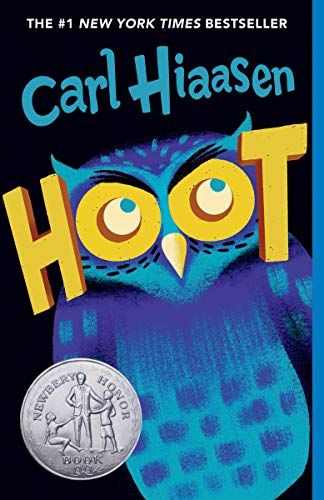 Everybody loves Mother Paula’s pancakes. Everybody, that is, except the colony of cute but endangered owls that live on the building site of the new restaurant. Can the awkward new kid and his feral friend prank the pancake people out of town? Or is the owls’ fate cemented in pancake batter?

Roy Eberhardt is the new kid--again. This time around it's Trace Middle School in humid Coconut Grove, Florida. But it's still the same old routine: table by himself at lunch, no real friends, and thick-headed bullies like Dana Matherson pushing him around. But if it wasn't for Dana Matherson mashing his face against the school bus window that one day, he might never have seen the tow-headed running boy. And if he had never seen the running boy, he might never have met tall, tough, bully-beating Beatrice. And if he had never met Beatrice, he might never have discovered the burrowing owls living in the lot on the corner of East Oriole Avenue. And if he had never discovered the owls, he probably would have missed out on the adventure of a lifetime. Apparently, bullies do serve a greater purpose in the scope of the universe. Because if it wasn't for Dana Matherson...

In his first novel for a younger audience, Carl Hiaasen (Basket Case, etc.) plunges readers right into the middle of an ecological mystery, made up of endangered miniature owls, the Mother Paula's All-American Pancake House scheduled to be built over their burrows, and the owls' unlikely allies--three middle school kids determined to beat the screwed-up adult system. Hiaasen's tongue is firmly in cheek as he successfully cuts his slapstick sense of humor down to kid-size. Sure to be a hoot, er, hit with middle school mystery fans. (Ages 10 to 15) --Jennifer Hubert

“It seems unlikely that the master of noir-tinged, surrealistic black humor would write a novel for young readers. And yet, there has always been something delightfully juvenile about Hiaasen’s imagination; beneath the bent cynicism lurks a distinctly 12-year-old cackle. In this thoroughly engaging tale of how middle schooler Roy Eberhardt, new kid in Coconut Cove, learns to love South Florida, Hiaasen lets his inner kid run rampant, both the subversive side that loves to see grown-ups make fools of themselves and the righteously indignant side, appalled at the mess being made of our planet. The story is full of offbeat humor, buffoonish yet charming supporting characters, and genuinely touching scenes of children enjoying the wildness of nature. He deserves a warm welcome into children’s publishing.”—Booklist

“You don’t have to be a young adult to enjoy it.”—The New York Times Book Review

“Yes, it is a hoot.”—The Washington Post Book World

Book Description Paperback. Condition: New. Language: English. Brand new Book. This Newbery Honor winner and #1 New York Times bestseller is a beloved modern classic. Hoot features a new kid and his new bully, alligators, some burrowing owls, a renegade eco-avenger, and several extremely poisonous snakes.Everybody loves Mother Paula's pancakes. Everybody, that is, except the colony of cute but endangered owls that live on the building site of the new restaurant. Can the awkward new kid and his feral friend prank the pancake people out of town? Or is the owls' fate cemented in pancake batter? Welcome to Carl Hiaasen's Florida--where the creatures are wild and the people are wilder!. Seller Inventory # ABZ9780440419396