Items related to Healing Back Pain: The Mind-Body Connection 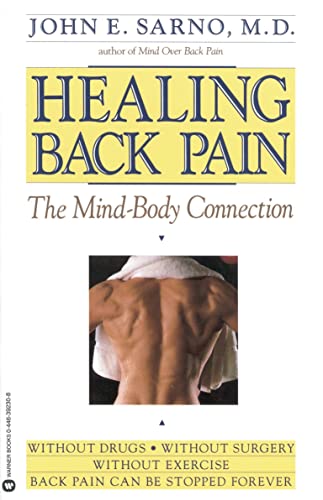 Dr. John E. Sarno's groundbreaking research on TMS (Tension Myoneural Syndrome) reveals how stress and other psychological factors can cause back pain-and how you can be pain free without drugs, exercise, or surgery.

Dr. Sarno's program has helped thousands of patients find relief from chronic back conditions. In this New York Times bestseller, Dr. Sarno teaches you how to identify stress and other psychological factors that cause back pain and demonstrates how to heal yourself--without drugs, surgery or exercise. Find out:

With case histories and the results of in-depth mind-body research, Dr. Sarno reveals how you can recognize the emotional roots of your TMS and sever the connections between mental and physical pain...and start recovering from back pain today.

Healing Back Pain promises permanent elimination of back pain without drugs, surgery, or exercise. It should have been titled Understanding TMS Pain, because it discusses one particular cause of back pain--Tension Myositis Syndrome (TMS)--and isn't really a program for self-treatment, with only five pages of action plan (and many more pages telling why conventional methods don't work). According to John E. Sarno, M.D., TMS is the major cause of pain in the back, neck, shoulders, buttocks, and limbs--and it is caused not by structural abnormalities but by the mind's effort to repress emotions. He's not saying that your pain is all in your head; rather, he's saying that the battle going on in your mind results in a real physical disorder that may affect muscles, nerves, tendons, or ligaments. An injury may have triggered the disorder, but is not the cause of the amount or intensity of the resulting pain. According to Sarno, the mind tricks you into not facing repressed emotion by making you focus on pain in the body. When this realization sinks in ("and it must sink in, for mere intellectual appreciation of the process is not enough"), the trick doesn't work any more, and there's no need for the pain. (Healing Back Pain should not be used for self-diagnosis. Always consult a physician for chronic or acute back pain.) --Joan Price

Book Description Paperback. Condition: New. Language: English. Brand new Book. Dr John E. Sarno is a medical pioneer whose program has helped thousands of patients overcome their back conditions- without drugs or serious surgery. Now, using his latest research into TMS (Tension Myositis Syndrome), Dr Sarno goes one step further: after identifying stress and other psychological factors in back pain, he demonstrates how many of his patients have then gone on to heal themselves without exercises or other physical therapy.Find out -- Why self-motivated and successful people are prone to TMS -- How anxiety and repressed anger trigger muscle spasms -- How people '' train themselves'' to experience back pain -- How to get relief from back pain within two-to-six weeks by recognising TMS and its causes.With case histories and the results of in-depth mind- body research, Dr Sarno describes how patients recognise the emotional roots of their TMS and sever the connections between mental and physical pain. and how, just by reading this book, you may start recovering from back pain today. Seller Inventory # ABZ9780446392303

Book Description Paperback. Condition: new. Paperback. One of the world&#039;s foremost back doctors examines new treatments to relieve pain without exercise, meditation, or physical therapy. The renowned author of the classic Mind Over Back Pain has written a new guide examining revolutionary treatments to relieve pain without exercise, medication, or physical therapy. Shipping may be from multiple locations in the US or from the UK, depending on stock availability. Seller Inventory # 9780446392303

Shipping: US$ 11.23
From United Kingdom to U.S.A.
Destination, rates & speeds