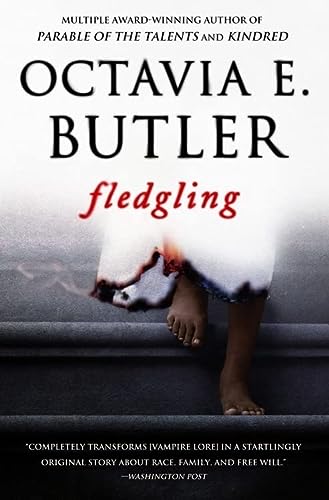 "A master storyteller, Butler casts an unflinching eye on racism, sexism, poverty, and ignorance and lets the reader see the terror and beauty of human nature." - The Washington Post

This is the story of an apparently young, amnesiac girl whose alarmingly unhuman needs and abilities lead her to a startling conclusion: She is in fact a genetically modified, 53-year-old vampire. Forced to discover what she can about her stolen former life, she must at the same time learn who wanted-and still wants-to destroy her and those she cares for and how she can save herself.

OCTAVIA E. BUTLER was a renowned African-American writer who received a MacArthur "Genius" Grant and PEN West Lifetime Achievement Award for her body of work. She was the author of several award-winning novels including Parable of the Talents, which won the Nebula for Best Novel. Acclaimed for her lean prose, strong protagonists, and social observations in stories that range from the distant past to the far future, sales of her books have increased enormously since her death as the issues she addressed in her Afrofuturistic, feminist novels and short fiction have only become more relevant. She passed away on February 24, 2006.

If vampires rose up as frequently as stories about them, we'd have to wear garlic necklaces every night. Tales about these suckers have been around for hundreds of years, of course, but in 1897 Bram Stoker's Dracula sunk its teeth deep into the collective imagination and spawned a thousand descendants. At this late date can anyone draw more blood from the story? "Buffy" gave up the ghost in 2003. The WB drove a stake through the heart of her spinoff, "Angel," the next year. "Dracula: The Musical" closed on Broadway in January. Anne Rice now writes about Jesus, for Christ's sake.

How strange to find Octavia E. Butler digging up the old bones of this legend. As the first African American woman to make a name for herself in science fiction and the winner of a MacArthur genius grant, she seems an unlikely victim of Dracula's allure. But, as we might expect, her new novel, Fledgling, doesn't just resurrect the pale trappings of vampire lore, it completely transforms them in a startlingly original story about race, family and free will.

"I awoke to darkness," the narrator begins. She's naked, badly burned, starving and without any idea where or who she is. She comes upon a group of homes destroyed by fire, but nothing looks familiar amid the cloud of pain and confusion. She can remember basic concepts only by trying to articulate what's missing: a bed, shoes, food. As a narrator, she couldn't seem more helpless, more vulnerable, more innocent. Then she chases down a deer and eats it. We're not in Kansas anymore.

Welcome to the creepy story of Shori Matthews, a 53-year-old vampire who looks like a 10-year-old black girl. Suffering from amnesia, she makes a desperate narrator as we follow her on a dangerous journey of self-discovery and survival. She must somehow divine everything about herself from the clues provided by her strange body, the ashes of those burned homes and -- almost immediately -- a group of men trying to kill her. There's not a drop of Bela Lugosi in these pages, but Fledgling exercises the same hypnotic power the old Count projected onto his victims. Squirming in my chair, I was totally hooked, sometimes nauseated, anxious to put it down, but unable to look away. Go back, go back!

The story's energy comes from the plight of a woman on the run, but its real fascination is generated by the sociology of human-vampire relations that Butler develops. We learn that the beings commonly called vampires are actually Ina, a matriarchal race whose culture predates humanity by several thousand years. Most of the legends involving crucifixes, crypts and bats are just silly superstitions about a shy, peaceful people who live among us in small, single-sex communes. Yes, Ina are nocturnal, but that's only because their pale skin lacks melanin to protect them from the sun. Otherwise, they're just like you and me.

Except that they live to be 500 years old and need human blood to survive. This is where Butler is at her most unnerving. Each Ina depends upon a group of seven or eight human "symbionts" for food. In exchange, these "syms" -- all willing volunteers, they insist -- enjoy the erotic pleasure of being "eaten," while living much longer lives. (Ina saliva contains a powerfully addictive narcotic and healing agent.) Shori and her first victim/volunteer, a young contractor named Wright, must discover this ancient arrangement largely on their own, working out the dimensions of their relationship amid Shori's visceral needs and Wright's understandable confusion. (He's never had sex with a 10-year-old girl before. The orgasmic feeding scenes are mercifully brief but still persistently repulsive.)

As Shori and Wright flee from the assassins, she discovers she's the product of a controversial genetic experiment to provide the Ina with black human skin so that they can endure sunlight. But Butler has no interest in crowding in on Michael Crichton's turf; she doesn't devote more than a paragraph to the mechanics of this science. What interests her are the challenges posed by scrambling races and the nature of power between masters and servants. Fledgling lies closer to the moral paradoxes of Edward P. Jones's The Known World than to the gothic themes of Bram Stoker's Dracula.

Ina are confident about the benefits they bestow on the humans who "volunteer" to feed them, and as Shori finds more of her kind, we see Ina/human families that seem to live in perfect peace. But despite his affection for Shori, Wright persists in asking awkward questions about the nature of her devotion and the extent to which he's really free to resist her. "Do you love me, Shori, or do I just taste good?" Yes, like much of Fledgling, that line has a high eww-factor, but in the context of this story, it's a deeply perplexing question. "I think the scariest thing about all this so far," Wright adds, "is that all . . . of those symbionts seem genuinely happy."

How many of our happy relationships involve a degree of dominance or dependence that we can't acknowledge? This is Butler's typically insidious method: to create an alternative social world that seems, at first, alien and then to force us to consider the nature of our own lives with a new, anxious eye. It's a pain in the neck, but impossible to resist.