Items related to Rabbit Is Rich 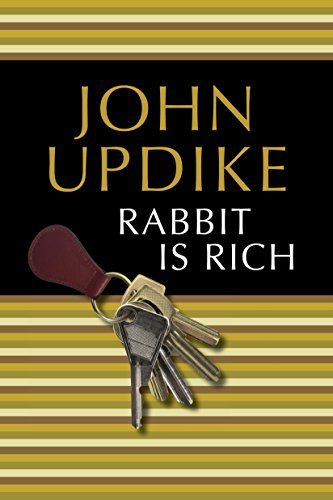 The hero of John Updike’s Rabbit, Run, ten years after the events of Rabbit Redux, has come to enjoy considerable prosperity as the chief sales representative of Springer Motors, a Toyota agency in Brewer, Pennsylvania. The time is 1979: Skylab is falling, gas lines are lengthening, and double-digit inflation coincides with a deflation of national self-confidence. Nevertheless, Harry “Rabbit” Angstrom feels in good shape, ready to enjoy life at last—until his wayward son, Nelson, returns from the West, and the image of an old love pays a visit to the lot. New characters and old populate these scenes from Rabbit’s middle age as he continues to pursue, in his zigzagging fashion, the rainbow of happiness.

"The reviewers seemed to be under the impression that the hero was a terrible character. It's incredible! No, I think it's the most interesting American novel I've read in quite a long time"

"The power of the novel comes from a sense, not absolutely unworthy of Thomas Hardy, that the universe hangs over our fates like a great sullen hopeless sky. There is real pain in the book, and a touch of awe"

"...An American protest against all the attempts to impress upon us the 'healthy, life-loving and comic' as our standard for novels. It is sexy, in bad taste, violent, and basically cynical. And good luck to it."

-- Angus Wilson, naming three Books of the Year in the Observer

"Against all odds, Rabbit Redux is a sequel that succeeds; it is in every respect uncannily superior to its distinguished predecessor and deserves to achieve even greater critical and popular acclaim."

"I can think of no stronger vindication of the claims of essentially realistic fiction than this extraordinary synthesis of the disparate elements of contemporary experience. Rabbit Redux is a great achievement, by far the most audacious and successful book Updike has written."

Rabbit Is Rich (Paperback or Softback)