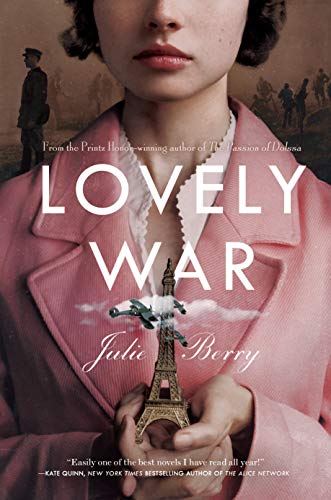 Read the novel New York Times bestselling author of The Alice Network Kate Quinn called "easily one of the best novels I have read all year!" A critically acclaimed, multi-layered romance set in the perilous days of World Wars I and II, where gods hold the fates--and the hearts--of four mortals in their hands.

They are Hazel, James, Aubrey, and Colette. A classical pianist from London, a British would-be architect-turned-soldier, a Harlem-born ragtime genius in the U.S. Army, and a Belgian orphan with a gorgeous voice and a devastating past. Their story, as told by goddess Aphrodite, who must spin the tale or face judgment on Mount Olympus, is filled with hope and heartbreak, prejudice and passion, and reveals that, though War is a formidable force, it's no match for the transcendent power of Love.

Hailed by critics, Lovely War has received seven starred reviews and is an indie bestseller. Author Julie Berry has been called "a modern master of historical fiction" by Bookpage and "a celestially inspired storyteller" by the New York Times, and Lovely War is truly her masterwork.

Julie Berry is the author of the 2017 Printz Honor and Los Angeles Times Book Prize shortlisted novel The Passion of Dolssa, the Carnegie and Edgar shortlisted All the Truth That's in Me, and many other acclaimed middle grade novels and picture books. She holds a BS from Rensselaer in communication and an MFA from Vermont College. She lives in Southern California with her family.

December 1942
The Judgment of Manhattan

I first saw Hazel at a parish dance at her London borough church, St. Matthias, in Poplar. It was November 1917.
It was a benefit, with a drive organized for socks and tins of Bovril broth powder to send to the boys in France. But really, it was a fall dance like the one they held every autumn.
While others chatted and flirted, Hazel glued herself to the piano bench and played dance tunes. The chaperones gushed about her generosity, putting others’ enjoyment before her own. Hazel was neither fooled nor flattered. She hated performing. But she’d rather stick pins in her eyeballs than make awkward conversation with boys. Anything was better. Even the spotlight.
She thought she was safe. But music draws me like a bee to honey. And not only me.
A young man sat some distance away and watched her play. He could see her hands, and the intent expression on her face. He tried not to stare, with limited success. He closed his eyes and listened to the music. But even as he listened, he saw in his mind’s eye the tall, straight form of the piano girl, dressed in pale mauve lace, with her dark-haired head lowered just enough to watch the keys, and her lips parted, ever so slightly, as she breathed in time with the song.
Oh, the minute I saw those two in the same room, I knew it. I knew this could be one of my masterpieces. You don’t find two hearts like this every day.
So I sat next to James, while he watched Hazel play, and kissed his cheek. Honestly, in his case, I don’t even think I needed to do it. But he had a very nice cheek, and I didn’t want to miss my chance. He’d shaved for the party, the little darling.
I was jealous of how he watched Hazel, drinking in her music like water and tasting how she dissolved herself in it like a sugar cube. None of the girls whirling by held anything for him. He was a neat sort of young man, very careful about his clothes, as though he dreaded the thought that his appearance might offend anyone. He shouldn’t have worried. He wasn’t exactly handsome, not at first glance, but there was something in those dark brown eyes that might cause Hazel to forget Chopin for a moment or two. If she would ever look up.
I slid onto the piano bench beside Hazel. She was so absorbed in her music that she didn’t notice my arrival. Of course, almost no one notices me, yet all but the hard-hearted do sense a new mood. Perhaps it’s my perfume. Perhaps it’s something more. When I pass by, Love is in the air.
Of the young men present, some hadn’t yet left for battlefields. Others were home on leave (medical or R & R). To their credit, the girls were wonderful about those with ghastly injuries, and made the wounded feel like princes. A few lads worked war production jobs in weapons factories. Some saw them as cowards shirking the battlefield, but this crowd of girls welcomed them in good humor. They were practical, these Poplar girls, and they preferred local beaux over absent loves. Some enterprising girls hedged their bets and held on to one of each.
The young ladies worked in munitions factories and in private homes as domestic servants. Not long ago they’d all been in school.
And then there was Hazel. She played like the daughter of a duchess, raised under the eye of the finest musical tutors. But she was the daughter of a music hall pianist and a factory seamstress. Hazel’s father pounded the keys at night to keep the wolf from the door, but he taught his daughter to love the masters. Beethoven and Schubert and Schumann and Brahms. She played like an angel.
James felt her angel music whoosh through his hair.
Poor James. He was in a predicament. The one girl to whom he’d like to speak carried the party’s entertainment in her hands. To interrupt her would be unthinkable; to wait until the party ended would mean she’d disappear into the crowd.
She reached a refrain, and I lifted her chin toward James’s watchful face.
She caught his expression in full. Both of them were too startled, at first, to break away.
Hazel kept on playing, but she had seen straight through those brown eyes and into the depths behind them, and felt something of the thrill of being seen, truly seen.
But music won’t keep. So Hazel played on. She wouldn’t look up at James again. Not until the song was over did she sneak a peek. But he wasn’t there. He’d gone.
It’s the quiet things I notice. Hazel exhaled her disappointment. She would’ve liked one more glimpse, to see if she’d imagined something passing between them.
Hazel, my dear, you’re an idiot, she told herself.
“Excuse me,” said a voice beside her.

Hazel turned to see a forest-green necktie tucked carefully into a gray tweed jacket, and above it all, the face of the young man with the dark brown eyes.
“Oh,” said Hazel. She stood up quickly.
“Hello,” he said very seriously. Almost as if it were an apology.
His face was grave, his figure slim, his shoes shined, and his dress shirt crisp. Hazel watched his shoes and waited for the heat in her face to subside. Did those shoes contain feet like her father’s, she wondered, with hair on top? Stupid, stupid thought!
“I’m sorry,” the young man said. “I didn’t mean to startle you.”
“That’s all right,” Hazel replied. “I mean, you didn’t.” A fib.
The scent of bay rum aftershave and clean, ironed cloth reached Hazel’s face and made it tingle. His cheeks were lean and smooth, and they looked so soft that Hazel’s fingers twitched to stroke them. The dread possibility that she might act upon the impulse was so mortifying to Hazel that she very nearly bolted for the door.
“I wanted to tell you,” the young man said, “how much I enjoyed your playing tonight.”
Now, at least, Hazel had a script. Her parents had coached her over a lifetime of piano recitals in how to respond to compliments.
“Thank you very much,” she said. “It’s kind of you to say so.”
It was a speech, from rote, and the young man knew it. A shadow passed across his face. Of course it did, the poor darling—he only had one chance to interact with her, only one thing he could decently say: that he loved her music, that it took him away ...