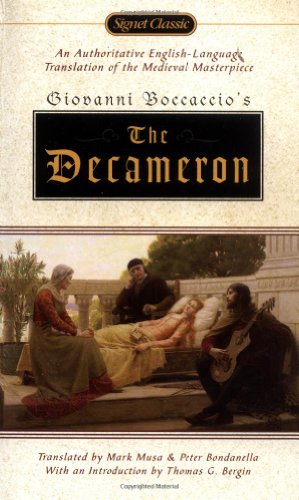 Set against the backdrop of the fourteenth-century Black Death, an anthology of one hundred interlinked tales presents a rich variety of colorful works recounted by the citizens of Florence--nobles, knights, abbots, nuns, doctors, philosophers, students, peasants, pilgrims, thieves, and others--who have fled the city to escape the plague. Reprint.

Giovanni Boccaccio was born in Florence, Italy, in 1313, and he died there in 1375. His life thus coincided with the flowering of the early Renaissance and indeed his closest friend was Petrarch, the other towering literary figure of the period. During his lifetime, Boccaccio was a diplomat, businessman, and international traveler, as well as the creator of numerous works of prose and poetry. Of his achievements, The Decameron, completed sometime between 1350 and 1352, remains his lasting contribution—immensely popular from its original appearance to the present day—to world literature.


Mark Musa is a professor at the Center for Italian Studies at Indiana University. A former Fulbright and Guggenheim Fellow, Musa is the author of a highly acclaimed translation of Dante's Divine Comedy.

Mark Musa and Peter Bondanella are professors at the Center for Italian Studies at Indiana University. Mark Musa, a former Fulbright and Guggenheim Fellow, is the author of a highly acclaimed translation of Dante’s Divine Comedy. Peter Bondanella, a former Younger Humanist and Senior Fellow of the National Endowment for the Humanities, has published, among other works, Machiavelli and the Art of Renaissance History and Federico Fellini: Essays in Criticism. He is coeditor of The Dictionary of Italian Literature and The Portable Machiavelli.