Items related to Basic Economics: A Citizen's Guide to the Economy

Sowell, Thomas Basic Economics: A Citizen's Guide to the Economy

Basic Economics: A Citizen's Guide to the Economy 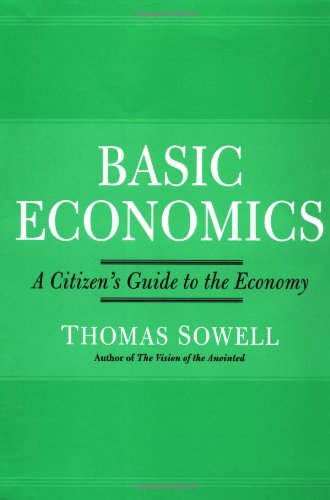 At last there is a citizen's guide to the economy, written by an economist who uses plain English. No jargon, no graphs, no equations. Yet this is a comprehensive survey, covering everything from rent control and the rise and fall of businesses to the international balance of payments.The purpose of Basic Economics is to enable people without any economic training to understand the way the economy functions-not only the American economy, but other economies around the world.Some of the clearest demonstrations of the role of prices, for example, come from economies in which prices are not allowed to function-with consequences which show just what those functions are and what happens when they are lacking.In the end, this is not a book from which to cram facts, but one from which to gain an understanding of the economy that will enable you to form your own conclusions on the basis of tested principles, rather than on the basis of emotion or rhetoric. That is the goal of the journey, but you should also enjoy the trip along the way.

1. Basic Economics: A Citizen's Guide To The Economy

2. Basic Economics: A Citizen's Guide To The Economy

3. Basic Economics: A Citizen's Guide to the Economy

6. Basic Economics: A Citizen's Guide to the Economy