Items related to Bridge For Dummies 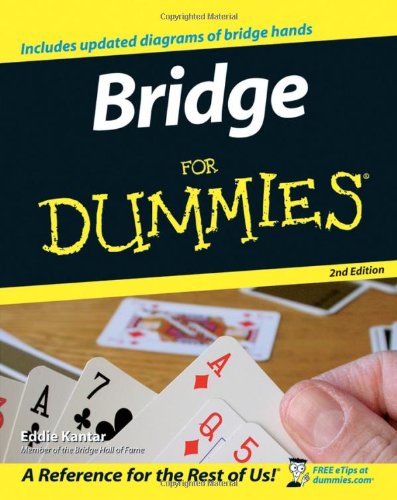 Bridge, as any player will tell you, is simply the best card game ever. It’s challenging—each hand presents a different set of conditions you must figure out and solve. It's very social—you play with a partner and two opponents. And best of all—it's fun.

Bridge For Dummies, 2E gives you a step-by-step explanation of the fundamentals of the game in terms you can understand. It walks you through the different aspects of bridge, featuring real-life examples, so that you can feel comfortable with the basics before you ever start to play. And if you're already experienced at the game, you'll discover a wealth of tips and hints that can make you a better player. You'll learn all about:

This newly revised edition features an expanded section on playing bridge online, with updated web addresses and other resources, along with new information on the latest bidding techniques. For anyone from novice to pro wanting to learn bridge or learn techniques to improve their game, Bridge For Dummies, 2E makes an ideal partner!

Find out how to strategize with your partner

Hone your bridge skills and trump your opponents in no time!

Bridge isn't a game for wimps, but this helpful guide opens the door to understanding bridge with plenty of illustrated example hands, the latest bidding techniques, and an updated resources list. Bridge champion Eddie Kantar demystifies the strategies you need to succeed at this challenging game.

Eddie Kantar, a transplanted Californian, is one of the best-known bridge writers in the world. He has more than 30 bridge books in print, some translated into 8 languages, and is a regular contributor to the Bulletin, The Bridge World, Bridge Today, and many other bridge publications.
Eddie, a two-time World Champion, is highly regarded as a player and known as one of bridge’s great ambassadors.
Eddie learned to play bridge at age 11. By the time he was 17, he was teaching the game to his friends. Eddie was so enthusiastic about bridge that he often took his bridge books to school, hiding them behind his textbooks so that the teachers couldn’t see him reading about bridge during class. At the University of Minnesota, where Eddie studied foreign languages, he taught bridge to pay his tuition.
Eddie gained stature as a player by winning 2 World Championship titles and 11 North American Championships. His North American titles include wins in the Spingold Knockout Teams, the Reisinger Board-a-Match Teams, the Vanderbilt Knockout Teams, and the Grand National Teams. Eddie is a Grand Master in World Bridge Federation rankings and an ACBL Grand Life Master. Today Eddie is best known as a writer, and many of his books are considered classics. When not playing bridge or writing about the subject, he can be found playing paddle tennis (an offshoot of tennis) or bridge at the paddle tennis courts at Venice Beach (come and join the fun in either game). By the way, Eddie is the only person ever to have played in both a World Bridge Championship and a World Table Tennis Championship (he did better at bridge).
Eddie was inducted into the Bridge Hall of Fame in 1996, the same year he was inducted into the Minnesota State Table Tennis Hall of Fame.