Items related to The Ultimate Hitchhiker's Guide: Complete and Unabridged 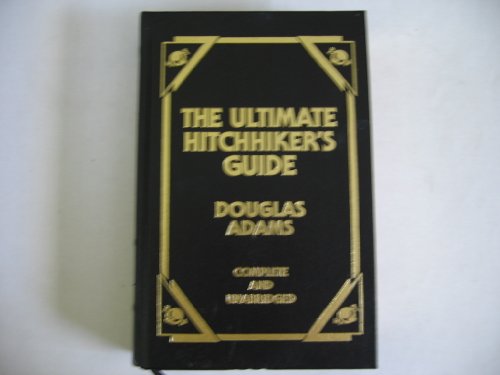 At last in paperback in one complete volume, here are the five classic novels from Douglas Adamsâ€™s beloved Hitchiker series.

The Hitchhikerâ€™s Guide to the Galaxy
Seconds before the Earth is demolished for a galactic freeway, Arthur Dent is saved by Ford Prefect, a researcher for the revised Guide. Together they stick out their thumbs to the stars and begin a wild journey through time and space.

The Restaurant at the End of the Universe
Facing annihilation at the hands of warmongers is a curious time to crave tea. It could only happen to the cosmically displaced Arthur Dent and his comrades as they hurtle across the galaxy in a desperate search for a place to eat.

Life, the Universe and Everything
The unhappy inhabitants of planet Krikkit are sick of looking at the night skyâ€“ so they plan to destroy it. The universe, that is. Now only five individuals can avert Armageddon: mild-mannered Arthur Dent and his stalwart crew.

So Long, and Thanks for All the Fish
Back on Earth, Arthur Dent is ready to believe that the past eight years were all just a figment of his stressed-out imagination. But a gift-wrapped fishbowl with a cryptic inscription conspires to thrust him back to reality. So to speak.

Mostly Harmless
Just when Arthur Dent makes the terrible mistake of starting to enjoy life, all hell breaks loose. Can he save the Earth from total obliteration? Can he save the Guide from a hostile alien takeover? Can he save his daughter from herself?

It's safe to say that The Hitchhiker's Guide to the Galaxy is one of the funniest science fiction novels ever written. Adams spoofs many core science fiction tropes: space travel, aliens, interstellar war--stripping away all sense of wonder and repainting them as commonplace, even silly.

This omnibus edition begins with The Hitchhiker's Guide to the Galaxy, in which Arthur Dent is introduced to the galaxy at large when he is rescued by an alien friend seconds before Earth's destruction. Then in The Restaurant at the End of the Universe, Arthur and his new friends travel to the end of time and discover the true reason for Earth's existence. In Life, the Universe, and Everything, the gang goes on a mission to save the entire universe. So Long, and Thanks for All the Fish recounts how Arthur finds true love and "God's Final Message to His Creation." Finally, Mostly Harmless is the story of Arthur's continuing search for home, in which he instead encounters his estranged daughter, who is on her own quest. There's also a bonus short story, "Young Zaphod Plays It Safe," more of a vignette than a full story, which wraps up this completist's package of the Don't Panic chronicles. As the series progresses, its wackier elements diminish, but the satire of human life and foibles is ever present. --Brooks Peck

At last, the complete Hitchhiker series in one volume! Five novels, including the new bestseller Mostly Harmless -- plus a bonus story, Young Zaphod Plays It Safe!