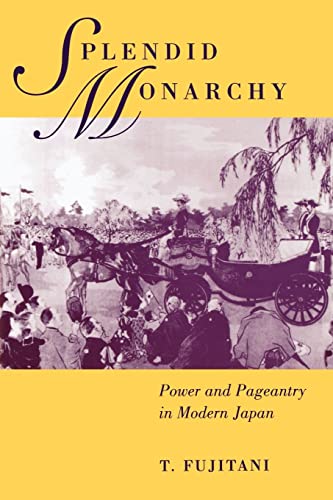 Using ceremonials such as imperial weddings and funerals as models, T. Fujitani illustrates what visual symbols and rituals reveal about monarchy, nationalism, city planning, discipline, gender, memory, and modernity. Focusing on the Meiji Period (1868-1912), Fujitani brings recent methods of cultural history to a study of modern Japanese nationalism for the first time.

In 1993, Masako Owada captured the world's attention when she agreed to marry Crown Prince Naruhito of Japan. She was widely portrayed as a progressive, Westernized woman about to enter one of the last bastions of traditional Japanese sexism. Crown Prince Naruhito's world was known to be steeped in ancient tradition, and the strictures placed on her were seen as tragic vestiges of the patriarchal past. But in this dramatic departure from accepted assumptions about Japan, T. Fujitani argues that just over a century ago, there was no such thing as an imperial family, imperial family, imperial wedding ceremonies were unheard of, and the image of the emperor as patriarch did not exist. Demonstrating how the trappings of the emperor were imported from nineteenth-century Western courts, he concludes that the Japanese monarchy as we know it is actually an invention of modern times. Fujitani focuses on public ceremonials and the construction of ritual spaces in the Meiji Period (1868-1912). His work is based on extensive research in Japanese archives and libraries, including the archives of the Imperial Household Agency. To explore the modern transformations of what is often portrayed as the longest continuously reigning monarchy in the world, he focuses on the monarchy's location within a modern regime of power, city planning, the media, and the gendering of politics. Throughout, he presents rare photographs and woodblock prints to trace the image of the emperor from a mysterious figure secluded inside a palanquin to a grand public personage riding in an open carriage in Western military regalia.

T. Fujitani is Associate Professor of History at the University of California, San Diego.