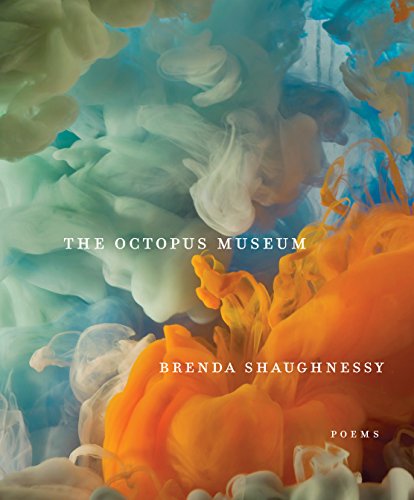 This collection of bold and scathingly beautiful feminist poems imagines what comes after our current age of environmental destruction, racism, sexism, and divisive politics.

Informed by Brenda Shaughnessy's craft as a poet and her worst fears as a mother, the poems in The Octopus Museum blaze forth from her pen: in these pages, we see that what was once a generalized fear for our children (car accidents, falling from a tree) is now hyper-reasonable, specific, and multiple: school shootings, nuclear attack, loss of health care, a polluted planet. As Shaughnessy conjures our potential future, she movingly (and often with humor) envisions an age where cephalopods might rule over humankind, a fate she suggests we may just deserve after destroying their oceans. These heartbreaking, terrified poems are the battle cry of a woman who is fighting for the survival of the world she loves, and a stirring exhibition of who we are as a civilization.

BRENDA SHAUGHNESSY was born in Okinawa and raised in Southern California. She is the author of four previous poetry collections, including So Much Synth, Human Dark with Sugar--winner of the James Laughlin Award and finalist for the National Book Critics Circle Award--and Our Andromeda, which was a New York Times Notable Book in 2013. A former Guggenheim fellow, she is an associate professor of English at Rutgers University, Newark. She lives in New Jersey.

I Want the World


You never know, when you say goodbye, if it’s the last time. Last time for who? For what?

Every time is the last—for that particular goodbye, wearing those clothes, at that airport. Me in my black dress—nightgown, ‘50s housecoat, funeral uniform. It passes for anything.

My daughter in her fuchsia track shorts and faded green t-shirt almost as soft as her luscious little arms. She was complaining, as usual. She was hungry. She was tired of traveling.

Her complaints were especially unpleasant since they only pointed up how innocent she was of how bad everything could get. The Legos are boring? Imagine no toys of any kind.

The chicken nuggets are too hot? Just wait. They’ll cool and by then, I hope she can learn to like lizard blood and shoelace chewing gum, because that’s what’s coming.

A fierce zip of pride bites my heart. She demands more because she knows there’s more in the world and she believes she should have it all. She knows what she wants: what she wants.

She believes the world is coming to her, not veering definitively away. She still thinks we can choose between ice cream flavors, bless her that she has so many possible flavors in mind.

Between stuffed animals and dolls. Which color lunch box you want for the whole school year. What school year, I think? Will first grade exist this coming fall?

She still thinks that what she thinks will affect what she gets. She still believes tantrums might get her her way. She doesn’t know yet that nobody gets her way.

We’re all lucky if we get anything at all, come dinnertime, come night, the next morning and the next hot morning, the next endangered livingspace if we get to stay there. We can’t carry all that stuff. But she doesn’t think of it as stuff.

She thinks of it as what she wants. Life’s been consistent—me resisting her demands, me in my black dress, cutting my hair to make her paintbrushes. If something happens to me, who will help her believe her beliefs?

She believes her desires—as erratic and irrational as a six-year old’s desire’s can be—nevertheless have intrinsic value.  A thread of hope wound, inextricable, all around and through her very person. I believe that too.

One of these mornings I’ll say goodbye, a routine goodbye when I go to the FedPlex warehouse to work or pick my rations, and in my absence she will lose that thread, come to fully understand what she wants is impossible in our world.

All of it, any of it, the tiniest thing, impossible.

I won’t have known but I’ll be walking away from my daughter for the last time, coming home (wherever home is) to someone new, someone broken off from my old girl, six years old.

Here, I tell her, providing a pencil with a pristine, unsharpened end, chew on this. Nobody’s touched it yet. It’s all yours, darling.

Somewhere I’ll find a blade to sharpen it, and we’ll find a scrap for drawing, a bit of napkin or a smooth, light stone. For now, you can chew on it. Soon you’ll be able to draw whatever you want.