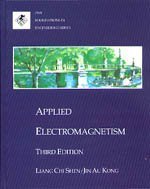 In their successful text, Shen and Kong cover fundamentals of static and dynamic electromagnetism fields and waves. The authors employ a unique approach, beginning with a study of Maxwell's equations and waves and covering electromagnetic fields later. This presentation allows students to work with electromagnetic concepts using relatively simple computational analysis, building in a logical progression to more complex topics and mathematical methods for analysis. The Third Edition provides computer-based problems, homework problems, end-of-chapter summaries, and a rich collection of real-world application examples that include discussion of cellular phone and microwave exposure limits set by IEEE; safety concerns about electromagnetic fields from power lines; new and powerful magnets; and single-mode optical fibers.

Dr. Liang C. Shen received the Ph. D. degree in applied physics from Harvard University in 1967. He then joined the faculty of the University of Houston in the Department of Electrical and Computer Engineering. He served as the Department Chairman from 1977 to 1981. Dr. Shen founded the Well Logging Laboratory in 1979. .He has published a textbook, more than 101 papers in technical journals and conferences. Dr. Shen received SPWLA Gold Medal for Technical achievement in 2001. Dr. Shen has been a Professor Emeritus in the Department of Electrical and Computer Engineering at the University of Houston since 2004.

Dr Jin Au Kong received a BS in 1962 from the National Taiwan University in Taipei, Taiwan, and an MS in 1962 from the National Chiao Tung University in Hsinchu, Taiwan. He came to the United States in 1965 and obtained a PhD from Syracuse University, where he continued as a postdoctoral research engineer until 1969. He joined the MIT faculty in 1969, was the leader of the Research Laboratory for Electronics (RLE) Center for Electromagnetic Theory and Applications. Over the years, he also served as a consultant to the New York Port Authority, Raytheon, Hughes Aircraft, Lockheed Missiles and Space, and MIT's Lincoln Lab. He also served as a visiting scientist at the Lunar Science Institute in Houston, a visiting professor at the University of Houston, and a high-level consultant to the United Nations. He has published more than 30 books on electromagnetics and more than 700 research papers and book chapters. Dr. Kong passed away in March 2008.