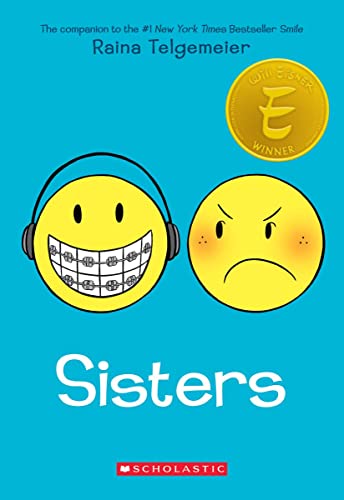 Raina can't wait to be a big sister. But once Amara is born, things aren't quite how she expected them to be. Amara is cute, but she's also a cranky, grouchy baby, and mostly prefers to play by herself. Their relationship doesn't improve much over the years, but when a baby brother enters the picture and later, something doesn't seem right between their parents, they realize they must figure out how to get along. They are sisters, after all.

Raina uses her signature humor and charm in both present-day narrative and perfectly placed flashbacks to tell the story of her relationship with her sister, which unfolds during the course of a road trip from their home in San Francisco to a family reunion in Colorado.

Raina Telgemeier is the #1 New York Times bestselling, multiple Eisner Award–winning creator of Smile and Sisters, which are both graphic memoirs based on her childhood. She is also the creator of Drama, which was named a Stonewall Honor Book and was selected for YALSA’s Top Ten Great Graphic Novels for Teens. Raina lives in the San Francisco Bay Area. To learn more, visit her online at www.goRaina.com.

*Starred Review* Telgemeier’s follow-up to Smile (2010)—possibly the only universally embraced graphic novel on the planet—offers the same thoughtful perspective while also creating a slightly more mature and complex tone. Raina boards the family minivan traveling from California to Colorado to visit relatives, sharing a charged and eventful trip with her mother, sister, and younger brother. Cleverly, the trip is interspersed with flashbacks that flesh out the emotional background and neatly dovetail with Smile. While the focus of the story explores Raina’s combative relationship with her younger sister, Amara, it is in some sense about families themselves, the tensions they breed, the unspoken worries that swirl through households, and the ways an older generation’s unintended example echoes through younger generations. This may sound dark and heavy, but it actually exists only as an underlying reality. Telgemeier keeps the surface story popping and zippy, even through the constant sparring between the awkwardly adolescent Raina and her firecracker younger sister, a relationship that will prove profoundly familiar to many readers. Telgemeier’s art complements her writing to great effect, offering a cheerful, vivid cartoon simplicity that allows readers to instantly engage even as it leaves room for deeper truths to take hold. HIGH-DEMAND BACKSTORY: New York Times best-selling Smile continues to be one of the most widely loved kid’s graphic novels in recent history. With a sizable first print run, Telgemeier’s publisher is counting on a repeat performance. Grades 5-8. --Jesse Karp

Book Description Paperback. Condition: New. Telgemeier, Raina (illustrator). Language: English. Brand new Book. The companion to Raina Telgemeier's bestselling graphic memoir, SMILE. Raina can't wait to be a big sister, but once Amara is born she realizes things won't be quite what she had expected.or hoped. Despite Amara's cuteness, she is a cranky, grouchy baby and mostly prefers to play by herself. Their relationship doesn't improve much over the years but when a baby brother enters the picture and their parents' relationship starts to struggle, they realize they must figure out how to get along. They are sisters, after all. Seller Inventory # AA89780545540605