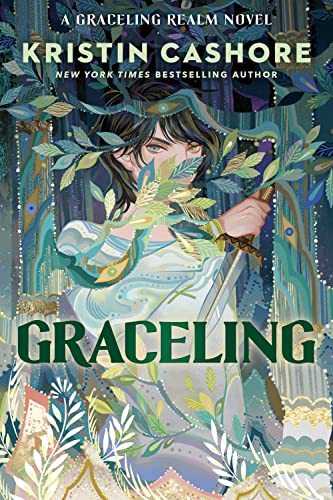 “Rageful, exhilarating, wistful in turns" (The New York Times Book Review) with “a knee weakening romance” (LA Times).  Graceling is a thrilling, action-packed fantasy adventure that will resonate deeply with anyone trying to find their way in the world.

Graceling tells the story of the vulnerable-yet-strong Katsa, who is smart and beautiful and lives in the Seven Kingdoms where selected people are born with a Grace, a special talent that can be anything at all. Katsa’s Grace is killing. As the king’s niece, she is forced to use her extreme skills as his brutal enforcer. Until the day she meets Prince Po, who is Graced with combat skills, and Katsa’s life begins to change. She never expects to become Po’s friend. She never expects to learn a new truth about her own Grace—or about a terrible secret that lies hidden far away . . . a secret that could destroy all seven kingdoms with words alone.

If you had the power to kill with your bare hands, what would you do with it?

Graceling takes readers inside the world of Katsa, a warrior-girl in her late teens with one blue eye and one green eye. This gives her haunting beauty, but also marks her as a Graceling. Gracelings are beings with special talents—swimming, storytelling, dancing. Katsa's Grace is considered more useful: her ability to fight (and kill, if she wanted to) is unequaled in the seven kingdoms. Forced to act as a henchman for a manipulative king, Katsa channels her guilt by forming a secret council of like-minded citizens who carry out secret missions to promote justice over cruelty and abuses of power.

Combining elements of fantasy and romance, Cashore skillfully portrays the confusion, discovery, and angst that smart, strong-willed girls experience as they creep toward adulthood. Katsa wrestles with questions of freedom, truth, and knowing when to rely on a friend for help. This is no small task for an angry girl who had eschewed friendships (with the exception of one cousin that she trusts) for her more ready skills of self-reliance, hunting, and fighting. Katsa also comes to know the real power of her Grace and the nature of Graces in general: they are not always what they appear to be.

Graceling is the first book in a series, and Kristin Cashore’s first work of fiction. It sets up a vivid world with engaging characters that readers will certainly look forward to following beyond the last chapter of this book. (Ages 14 and up) --Heidi Broadhead

KRISTIN CASHORE grew up in the northeast Pennsylvania countryside as the second of four daughters. She received a bachelor's degree from Williams College and a master's from the Center for the Study of Children's Literature at Simmons College, and she has worked as a dog runner, a packer in a candy factory, an editorial assistant, a legal assistant, and a freelance writer. She has lived in many places (including Sydney, New York City, Boston, London, Austin, and Jacksonville, Florida), and she currently lives in the Boston area. Graceling, her first book, was an ALA Best Book for Young Adults.