Items related to A Wizard of Earthsea (The Earthsea Cycle, Book 1) 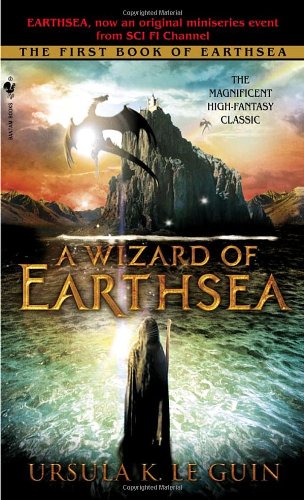 Ged was the greatest sorcerer in all Earthsea,  but once he was called Sparrowhawk, a reckless  youth, hungry for power and knowledge, who tampered  with long-held secrets and loosed a terrible shadow  upon the world. This is the tale of his testing,  how he mastered the mighty words of power, tamed an  ancient dragon, and crossed death's threshold to  restore the balance.

Often compared to Tolkien's Middle-earth or Lewis's Narnia, Ursula K. Le Guin's Earthsea is a stunning fantasy world that grabs quickly at our hearts, pulling us deeply into its imaginary realms. Four books (A Wizard of Earthsea, The Tombs of Atuan, The Farthest Shore, and Tehanu) tell the whole Earthsea cycle--a tale about a reckless, awkward boy named Sparrowhawk who becomes a wizard's apprentice after the wizard reveals Sparrowhawk's true name. The boy comes to realize that his fate may be far more important than he ever dreamed possible. Le Guin challenges her readers to think about the power of language, how in the act of naming the world around us we actually create that world. Teens, especially, will be inspired by the way Le Guin allows her characters to evolve and grow into their own powers.

In this first book, A Wizard of Earthsea readers will witness Sparrowhawk's moving rite of passage--when he discovers his true name and becomes a young man. Great challenges await Sparrowhawk, including an almost deadly battle with a sinister creature, a monster that may be his own shadow.

Ursula Kroeber Le Guin was born in 1929; her parents were the anthropologist Alfred Kroeber and the writer Theodora Kroeber. She writes both poetry and prose, including realistic fiction, science fiction, fantasy, young children's books, books for young adults, screenplays, essays, verbal texts for musicians, and voicetexts for performance or recording. She has published five books of poetry, seventeen novels, over a hundred short stories (collected in eight volumes), two collections of essays, eleven books for children, and two volumes of translation. Several of Le Guin's major titles have remained continuously in print for over thirty years. Her best known fantasy works, the first four Books of Earthsea, have sold millions of copies in America and England, and have been translated into sixteen languages. Three of Le Guin's books have been finalists for the American Book Award and the Pulitzer Prize, and among the many honors her writing has received are the National Book Award, five Hugo Awards, five Nebula awards, the Kafka award, a Pushcart Prize, the Howard Vursell award of the American Academy of Arts and Letters, and the L.A. Times Robert Kirsch Award.

Book Description Condition: New. Ruth Robbins (illustrator). Ged was the greatest sorcerer in all Earthsea,??but once he was called Sparrowhawk, a reckless??youth, hungry for power and knowledge, who tampered??with long-held secrets and loosed a terrible shadow??upon the world. This is the tale of his testing,??how he mastered the mighty words of power, tamed an??ancient dragon, and crossed death's threshold to??restore the balance. Seller Inventory # 9780553262506