Items related to A Grief Observed 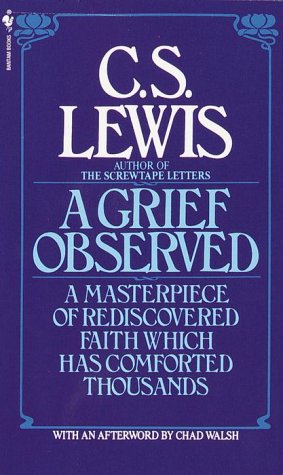 In April 1956, C.S. Lewis, a confirmed bachelor, married Joy Davidman, an American poet with two small children. After four brief, intensely happy years, Lewis found himself alone again, and inconsolable. To defend himself against the loss of belief in God, Lewis wrote this journal, an eloquent statement of rediscovered faith. In it he freely confesses his doubts, his rage, and his awareness of human frailty. In it he finds again the way back to life.

C.S. Lewis joined the human race when his wife, Joy Gresham, died of cancer. Lewis, the Oxford don whose Christian apologetics make it seem like he's got an answer for everything, experienced crushing doubt for the first time after his wife's tragic death. A Grief Observed contains his epigrammatic reflections on that period: "Your bid--for God or no God, for a good God or the Cosmic Sadist, for eternal life or nonentity--will not be serious if nothing much is staked on it. And you will never discover how serious it was until the stakes are raised horribly high," Lewis writes. "Nothing will shake a man--or at any rate a man like me--out of his merely verbal thinking and his merely notional beliefs. He has to be knocked silly before he comes to his senses. Only torture will bring out the truth. Only under torture does he discover it himself." This is the book that inspired the film Shadowlands, but it is more wrenching, more revelatory, and more real than the movie. It is a beautiful and unflinchingly honest record of how even a stalwart believer can lose all sense of meaning in the universe, and how he can gradually regain his bearings. --Michael Joseph Gross

Written with love, humility, and faith, this brief but poignant volume was first published in 1961 and concerns the death of C. S. Lewis's wife, the American-born poet Joy Davidman. In her introduction to this new edition, Madeleine L'Engle writes: "I am grateful to Lewis for having the courage to yell, to doubt, to kick at God in angry violence. This is a part of a healthy grief which is not often encouraged. It is helpful indeed that C. S. Lewis, who has been such a successful apologist for Christianity, should have the courage to admit doubt about what he has so superbly proclaimed. It gives us permission to admit our own doubts, our own angers and anguishes, and to know that they are part of the soul's growth."

Written in longhand in notebooks that Lewis found in his home, A Grief Observed probes the "mad midnight moments" of Lewis's mourning and loss, moments in which he questioned what he had previously believed about life and death, marriage, and even God. Indecision and self-pity assailed Lewis. "We are under the harrow and can't escape," he writes. "I know that the thing I want is exactly the thing I can never get. The old life, the jokes, the drinks, the arguments, the lovemaking, the tiny, heartbreaking commonplace." Writing A Grief Observed as "a defense against total collapse, a safety valve," he came to recognize that "bereavement is a universal and integral part of our experience of love."

Lewis writes his statement of faith with precision, humor, and grace. Yet neither is Lewis reluctant to confess his continuing doubts and his awareness of his own human frailty. This is precisely the quality which suggests that A Grief Observed may become "among the great devotional books of our age."