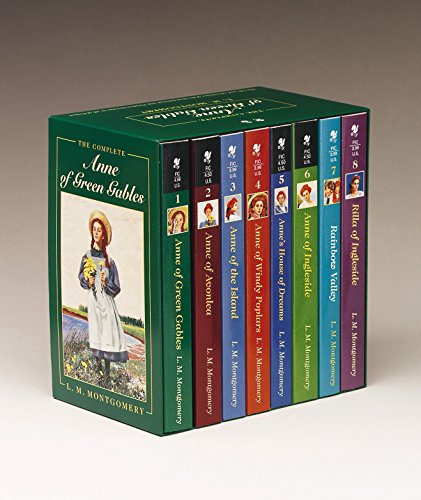 The only complete Anne of Green Gables box set! Makes a great gift and is a must-have for any longtime Anne fan or anyone excited about the new series streaming on Netflix!

Favorites for nearly 100 years, these classic novels follow the adventures of the spirited redhead Anne Shirley, who comes to stay at Green Gables and wins the hearts of everyone she meets.

When Marilla and Matthew Cuthbert of Green Gables, Prince Edward Island, send for a boy orphan to help them out at the farm, they are in no way prepared for the error that will change their lives. The mistake takes the shape of Anne Shirley, a redheaded 11-year-old girl who can talk anyone under the table. Fortunately, her sunny nature and quirky imagination quickly win over her reluctant foster parents. Anne's feisty spirit soon draws many friends--and much trouble--her way. Not a day goes by without some melodramatic new episode in the tragicomedy of her life. Early on, Anne declares her eternal antipathy for Gilbert Blythe, a classmate who commits the ultimate sin of mocking her hair color. Later, she accidentally dyes that same cursed hair green. Another time, in her haste to impress a new neighbor, she bakes a cake with liniment instead of vanilla. Lucy Maud Montgomery's series of books about Anne have remained classics since the early 20th century. Her portrayal of this feminine yet independent spirit has given generations of girls a strong female role model, while offering a taste of another, milder time in history. This lovely boxed gift collection comprises Anne of Green Gables, Anne of the Island, Anne of Avonlea, Anne of Windy Poplars, Anne's House of Dreams, Anne of Ingleside, Rainbow Valley, and Rilla of Ingleside. (Ages 9 to 12) --Emilie Coulter

Now even the youngest Anne of Green Gables fans can celebrate the centennial anniversary.

Book Description Condition: New. We're not a giant, faceless warehouse organization! We're a small town bookstore that loves books and loves it's customers! Buy from us and you get great service as well as a great price! Your business is valued and your sati. Seller Inventory # OTF-2-9780553609417

The Complete Anne of Green Gables: The Life and Adventures of the Most Beloved and Timeless Heroine in All of Fiction (Paperback or Softback)

Book Description Paperback or Softback. Condition: New. The Complete Anne of Green Gables: The Life and Adventures of the Most Beloved and Timeless Heroine in All of Fiction. Book. Seller Inventory # BBS-9780553609417

The Complete Anne of Green Gables: The Life and Adventures of the Most Beloved and Timeless Heroine in All of Fiction (Boxed Set)