Items related to If You Lived In Colonial Times

McGovern, Ann If You Lived In Colonial Times 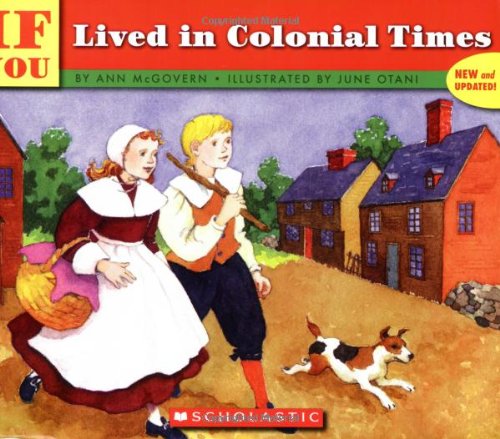 If you lived in colonial times
--What kind of clothes would you wear?
--Would you go to school?
--What would happen if you didn't behave?

This book tells you what it was like to live in the New England colonies during the years 1565 to 1776.

Ann McGovern has written over 35 children's books, including STONE SOUP; several books in the IF YOU LIVED... series; and SCRAM, KID! (Viking, 1974), which won the Horn Book Award. McGovern spent part of her career at Scholastic, where she created the SeeSaw Book Club. McGovern lives in New York City.

Did children have to worry about table manners? When you sit down to eat with your family, you are allowed to talk. If you lived in colonial days, you had to keep quiet.

You could not even sit down! You had to stand at the table all through the meal.

When supper was good, you could not say so.

When supper was bad, you could not say so either.

You could not say a word at the table. "Speak not" was a rule to remember.

"Sing not, hum not, wriggle not" was one rule.

Has your mother ever said to you, "Don't take such big bites. Don't make so much noise when you chew?"

There were the same rules in colonial days. All the rules were printed in a book of manners, and you had to learn them all.

The book of manners said, "Stuff not thy mouth to fill thy cheeks."

"Make not a noise with thy tongue, lips, or breath in the eating or drinking."

It was good manners to eat with your fingers. There were spoons. But there were no forks until later colonial days. You used the same knife to cut your meat and to work with wood.

In many homes, one big pot was put on the table.

Everyone put his spoon or his fingers into the pot to take out his food.

Your plate was a wooden board called a trencher. You shared your trencher with a sister or brother. You didn't have your own trencher. That would be too fancy!

If You Lived In Colonial Times Mcgovern, Ann and Otani, June