Items related to More Than a Game

Mogamed, Allie More Than a Game

More Than a Game 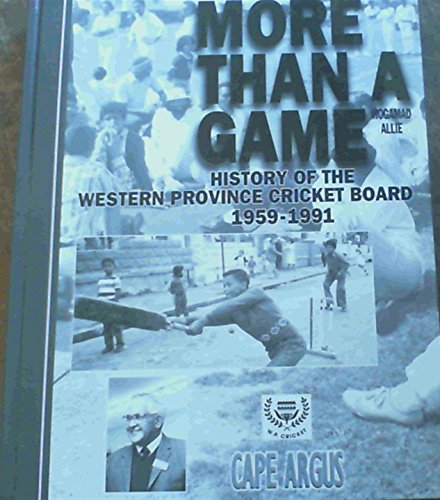 Most South Africans heard the story of Basil D'Oliviera - he travelled from the dusty fields of the Cape Flats to England, to realize a dream of playing test cricket. But how many have heard of the equally talented Cecil Abrahams, Owen Williams, Dik Abed, Coetie Neethling, Saait Magiet, Vincent Barnes, and countless others, who were denied the opportunity of playning the game at the highest level? What were the aims and ideals of the Western Province Cricket Board? What motivated their players? Why did their clubs have to play on matting wickets surrounded by sand and weeds? Why did so many of their members campaign so enthusiastically for an international ban to be imposed on their white counterparts? And what motivated them eventually to form a single, united provincial body with the white Western Province Cricket Union in 1991? More Than A Game - History of the Western Province Cricket Board 1959-1991, brings you all the answers in a no-holds barred, blow-by-blow account of an organisation that refused to be cowed - by the apartheid government, by rival bodies, and even by some of their own members. Includes match summaries, averages, career and performance records, an index.

Book Description Boards-Laminated. Condition: Fine. When cricket in the Western Province was finally unified under one controlling body in June 1991, after nearly a century of playing under racially divided bodies. many people especially, white and younger cricket followers were completely in the dark about the rich history of the Western Province Cricket Board (WPCB), 375 pages detailed and expansive text with illustrations, tables and informatation.Fine. (QW-6S). Seller Inventory # 000857