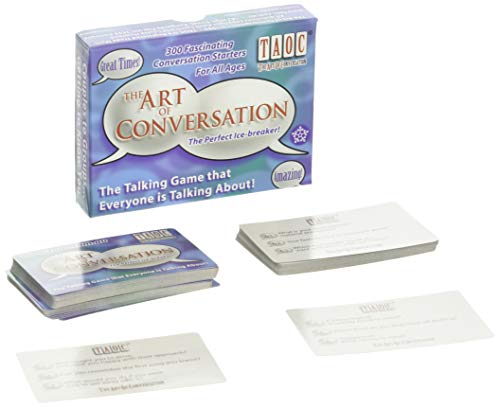 Designed to revive The Art of Conversation, TAOC® is the ideal way to truly enjoy connecting with family, friends and new acquaintances. Carefully researched, developed and tested, even teens will enjoy turning off the screens and sharing ideas and experiences. With over 300 fascinating and conversation building questions, this game is for everyone.

About the Author:
Keith Lamb migrated from Norwich, Norfolk England to Australia in 1970 and formed the successful, multi-cultural glam-rock band Hush. As lead singer and co-writer for much of Hush’s material, he lead the band to great national success, with many top ten hits such as Glad All Over and Boney Maronie. Keith toured Australia and New Zealand almost continuously for almost a decade and was a regular compere on the music shows such as Countdown, Sounds Unlimited, Hey Hey It’s Saturday, GTK and more.
After Hush, Keith performed in the first production of Jesus Christ, Superstar, He produced many successful albums e.g. Pioneers (the poetry of Banjo Patterson set to music) which went triple platinum. Keith co-wrote many songs for Status Quo, including several top 10 hits such as Ol’ Rag Blues and Over the Edge. He has supported many British Rock acts, such as The Who. The ABC’s Australian Story made a documentary, narrated by Louise, tracing some of Keith’s life, from the Hush days to the present. Hush starred in the recent Countdown Spectacular Tour of Australia in 2006 to high acclaim.

Louise Howland is an Australian who has traveled widely and worked in many fields, including as a psychiatric nurse and music teacher. Amongst her loves are nature, books, writing, music, art and travel. Louise has a natural gift for lateral thinking. Louise formed the company Rajmahal in 1986. Rajmahal (www.rajmahal.com.au) manufactures and wholesales unique embroidery designs and materials, exporting to the USA, Canada, UK, South Africa, Turkey and various countries in Europe. Louise is a monthly columnist for Embroidery & Cross Stitch magazine. She is studying for a Masters degree in Children’s communication. Louise and Keith are passionate about conversation and its benefits. They have researched and developed TAOC® as a labour of love over many years.

Book Description Cards. Condition: New. Language: English. Brand new Book. With 300 fascinating and conversation building questions, plus blank cards on which to write your own questions, this game is for everyone. The only knowledge needed to successfully contribute to TAOC is your own life experiences, interests and ideas. When time is short, a proper conversation is often the first commodity to be cut from our to-do lists. Yet it is necessary to understand each other and build our relationships. As well as helping people learn how to talk, TAOC places equal emphasis on learning how to listen. Seller Inventory # AAZ9780646462141

The Art of Conversation

The Art of Conversation: The Perfect Ice-breaker!