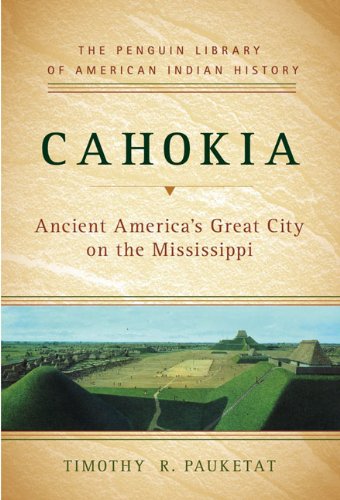 The fascinating story of a lost city and an unprecedented civilization

Almost a thousand years ago, a Native American city flourished along the Mississippi River near what is now St. Louis. Cahokia was a thriving metropolis at its height with a population of twenty thousand, a sprawling central plaza, and scores of spectacular earthen mounds. The city gave rise to a new culture that spread across the plains; yet by 1400 it had been abandoned, leaving only the giant mounds as monuments and traces of its influence in tribes we know today.

In Cahokia, anthropologist Timothy R. Pauketat reveals the story of the city and its people as uncovered by the dramatic digs of American corn-belt archaeologists. These excavations have revealed evidence of a powerful society, including complex celestial timepieces, the remains of feasts big enough to feed thousands, and disturbing signs of large-scale human sacrifice.

Drawing on these pioneering digs and a wealth of analysis by historians and archaeologists, Pauketat provides a comprehensive picture of what's been discovered about Cahokia and how these findings have challenged our perceptions of Native Americans. Cahokia is a lively read and a compelling narrative of prehistoric America.

Timothy R. Pauketat is professor of anthropology at the University of Illinois, Urbana- Champaign. His books include Chiefdoms and Other Archaeological Delusions and Ancient Cahokia and the Mississippians.

From The Washington Post's Book World/washingtonpost.com Reviewed by Dennis Drabelle Last year, an article in the St. Louis Post-Dispatch explained that Illinois's budgetary problems were leading to neglect at Cahokia Mounds, a state park. But as Timothy R. Pauketat's new book makes clear, Cahokia Mounds is not just of state importance (it is also a U.N. World Heritage Site). The great mounds built across the Mississippi River from St. Louis were quite influential, believes Pauketat, an anthropology professor at the University of Illinois at Urbana-Champaign: "The people of this North American city seem to have created their own culture, then proceeded to spread it across the Midwest and into the South and Plains with a religious fervor." In other words, Cahokia was the mother of North American mound mania, whose beginnings go back a thousand years. Mound-building flourished in a culture that made much of the planet Venus, exacted human sacrifice and ate a diet heavy on maize. Some archaeologists believe that there are links between Cahokia and the great civilizations of pre-Columbian Mexico, to which Cahokian residents may well have traveled and from which they may have brought back stories and images that figure in Cahokian mythology, such as "the cult of a Corn Mother or of twin Thunderers." Pauketat's book, which summarizes these and other theories as to what the Cahokia site means, is part of the Penguin Library of American Indian History.
Copyright 2009, The Washington Post. All Rights Reserved.