Items related to The Odyssey 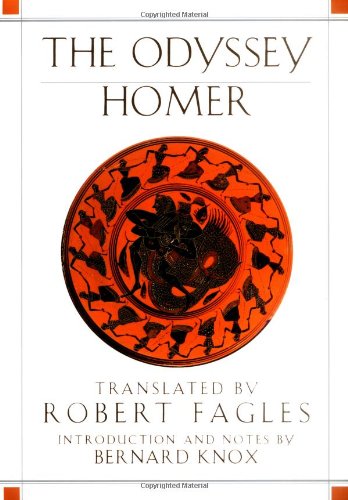 The Odyssey is literature's grandest evocation of every man's journey through life. In the myths and legends that are retold here, renowned translator Robert Fagles has captured the energy and poetry of Homer's original in a bold, contemporary idiom and given us an edition of The Odyssey to read aloud, to savor, and to treasure for its sheer lyrical mastery. This is an edition to delight both the classicist and the general reader, and to captivate a new generation of Homer's students.

Robert Fagles's translation is a jaw-droppingly beautiful rendering of Homer's Odyssey, the most accessible and enthralling epic of classical Greece. Fagles captures the rapid and direct language of the original Greek, while telling the story of Odysseus in lyrics that ring with a clear, energetic voice. The story itself has never seemed more dynamic, the action more compelling, nor the descriptions so brilliant in detail. It is often said that every age demands its own translation of the classics. Fagles's work is a triumph because he has not merely provided a contemporary version of Homer's classic poem, but has located the right language for the timeless character of this great tale. Fagles brings the Odyssey so near, one wonders if the Hollywood adaption can be far behind. This is a terrific book.

He was one of a long line of bards, or poets, who worked in the oral tradition. Homer and other bards of the time could recite, or chant, long epic poems. Both works attributed to Homer the Iliad and the Odyssey are over ten thousand lines long in the original. Homer must have had an amazing memory but was helped by the formulaic poetry style of the time.

We can never be certain that both these stories belonged to Homer. In fact Homer’ may not be a real name but a kind of nickname meaning perhaps the hostage’ or the blind one’. Whatever the truth of their origin, the two stories, developed around three thousand years ago, may well still be read in three thousand years’ time.