Items related to All That I Am

Anna Funder All That I Am

All That I Am 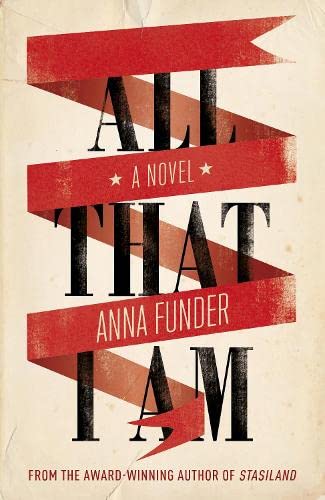 All That I Am is a masterful and exhilarating exploration of bravery and betrayal, of the risks and sacrifices some people make for their beliefs, and of heroism hidden in the most unexpected places.

When eighteen-year-old Ruth Becker visits her cousin Dora in Munich in 1923, she meets the love of her life, the dashing young journalist Hans Wesemann, and eagerly joins in the heady activities of the militant political Left in Germany. Ten years later, Ruth and Hans are married and living in Weimar Berlin when Hitler is elected chancellor of Germany. Together with Dora and her lover, Ernst Toller, the celebrated poet and self-doubting revolutionary, the four become hunted outlaws overnight and are forced to flee to London. Inspired by the fearless Dora to breathtaking acts of courage, the friends risk betrayal and deceit as they dedicate themselves to a dangerous mission: to inform the British government of the very real Nazi threat to which it remains willfully blind. All That I Am is the heartbreaking story of these extraordinary people, who discover that Hitler’s reach extends much further than they had thought.

Gripping, compassionate, and inspiring, this remarkable debut novel reveals an uncommon depth of humanity and wisdom. Anna Funder has given us a searing and intimate portrait of courage and its price, of desire and ambition, and of the devastating consequences when they are thwarted.

Anna Funder's international bestseller, Stasiland, won the Samuel Johnson Prize for nonfiction. Her debut novel, All That I Am, has won many prizes, including the prestigious Miles Franklin Literary Award. Anna Funder lives in Brooklyn, New York, with her husband and children.

1. ALL THAT I AM - SIGNED, FIRST LINED & DATED FIRST EDITION FIRST PRINTING.

Book Description Penguin Viking, London, 2011. Hardcover. Condition: New. Dust Jacket Condition: New. 1st Edition. Signed, First Lined (with the first line of the book "When Hitler came to power, I was in the Bath") & Dated (19.9.11) by Anna Funder to the Title Page. The Book & Dust Jacket are in As New condition. This unread book is guaranteed to be a 1st Edition, 1st Printing. Publishers number 1 confirms that this is a first printing. The Jacket, which has not been price clipped, is protected by archival protective covering. The book is professionally wrapped and packed with great care with bubble wrap and placed in a special book box to ensure that the book arrives at your destination in perfect condition. Signed by Author(s). Seller Inventory # 001223

Shipping: US$ 22.92
From United Kingdom to U.S.A.
Destination, rates & speeds