Items related to The Johnstown Flood 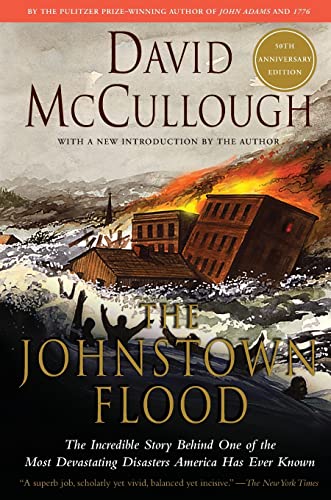 The stunning story of one of America’s great disasters, a preventable tragedy of Gilded Age America, brilliantly told by master historian David McCullough.

At the end of the nineteenth century, Johnstown, Pennsylvania, was a booming coal-and-steel town filled with hardworking families striving for a piece of the nation’s burgeoning industrial prosperity. In the mountains above Johnstown, an old earth dam had been hastily rebuilt to create a lake for an exclusive summer resort patronized by the tycoons of that same industrial prosperity, among them Andrew Carnegie, Henry Clay Frick, and Andrew Mellon. Despite repeated warnings of possible danger, nothing was done about the dam. Then came May 31, 1889, when the dam burst, sending a wall of water thundering down the mountain, smashing through Johnstown, and killing more than 2,000 people. It was a tragedy that became a national scandal.

Graced by David McCullough’s remarkable gift for writing richly textured, sympathetic social history, The Johnstown Flood is an absorbing, classic portrait of life in nineteenth-century America, of overweening confidence, of energy, and of tragedy. It also offers a powerful historical lesson for our century and all times: the danger of assuming that because people are in positions of responsibility they are necessarily behaving responsibly.

The history of civil engineering may sound boring, but in David McCullough's hands it is, well, riveting. His award-winning histories of the Brooklyn Bridge and the Panama Canal were preceded by this account of the disastrous dam failure that drowned Johnstown, Pennsylvania, in 1889. Written while the last survivors of the flood were still alive, McCullough's narrative weaves the stories of the town, the wealthy men who owned the dam, and the forces of nature into a seamless whole. His account is unforgettable: "The wave kept on coming straight toward him, heading for the very heart of the city. Stores, houses, trees, everything was going down in front of it, and the closer it came, the bigger it seemed to grow.... The height of the wall of water was at least thirty-six feet at the center.... The drowning and devastation of the city took just about ten minutes." A powerful, definitive book, and a tribute to the thousands who died in America's worst inland flood. --Mary Ellen Curtin

The Johnstown Flood (Paperback or Softback)