Items related to The Sibley Guide to Birds 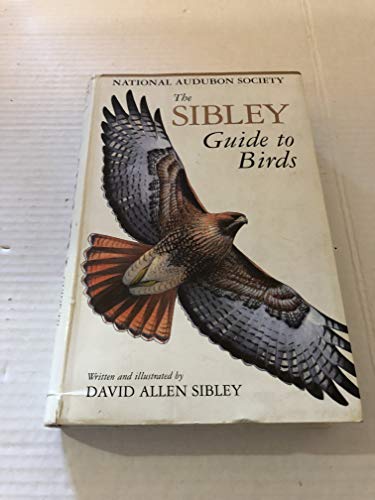 David Allen Sibley, America's most gifted contemporary painter of birds, is the author and illustrator of this comprehensive guide. His beautifully detailed illustrations—more than 6,600 in all—and descriptions of 810 species and 350 regional populations will enrich every birder's experience.

The Sibley Guide's innovative design makes it entirely user friendly. The illustrations are arranged to facilitate comparison, yet still capture the unique character of each species.

The Sibley Guide to Birds provides a wealth of new information:
—Captioned illustrations show many previously unpublished field marks and revisions of known marks
—Nearly every species is shown in flight
—Measurements include length, wingspan, and weight for every species
—Subspecies and geographic varients are covered thoroughly
—Complete voice descriptions are included for every species
—Maps show the complete distribution of every species: summer and winter ranges, migration routes, and rare occurrences

Both novice and experienced birders will appreciate these and other innovative features:
—An introductory page for each family or group of related families makes comparisons simple
—Clear and concise labels with pointers identify field marks directly
—Birds are illustrated in similar poses to make comparisons between species quick and easy
—Illustrations emphasize the way birds look in the field

With The Sibley Guide to Birds, the National Audubon Society makes the art and expertise of David Sibley available to the world in a comprehensive, handsome, easy-to-use volume that will be the indispensable identification guide every birder must own.

More than 10 years in the making, David Sibley's Guide to Birds is a monumental achievement. The beautiful watercolor illustrations (6,600, covering 810 species in North America) and clear, descriptive text place Sibley and his work squarely in the tradition of John James Audubon and Roger Tory Peterson; more than a birdwatcher and evangelizer, he is one of the foremost bird painters and authorities in the U.S. Still, his field guide will no doubt spark debate. Unlike Kenn Kaufman's Focus Guide, Sibley's is unapologetically aimed at the converted. Beginning birders may want to keep a copy of Sibley at home as a reference, but the wealth of information will have the same effect on novices as trying to pick out a single sandpiper in a wheeling flock of thousands. The familiar yellow warbler, for instance, gets no less than nine individual illustrations documenting its geographic, seasonal, and sex variations--plus another eight smaller illustrations showing it in flight. Of course, more experienced birders will appreciate this sort of detail, along with Sibley's improvements on both Peterson and the National Geographic guide:

Some birders will be put off by the book's size. Slightly larger than the National Geographic guide, it's less portable than most field guides and will likely spend more time in cars and desks than on a birder's person while in the field. For some it will be a strictly stay-at-home companion guide to consult after a field trip; others may want to have it handy in a fannypack or backpack. But regardless of how it is used, Sibley's Guide to Birds is a significant addition to any birding library. "Birds are beautiful," the author writes in the preface, "their colors, shapes, actions, and sounds are among the most aesthetically pleasing in nature." Pleasing, too, is this comprehensive guide to their identification. --Langdon Cook

Birders are an optimistic lot--always looking forward to the next day, the next season--and no season is as keenly anticipated as spring. Everyone loves spring, of course, but to a birder that feeling is multiplied as spring is the season of discovery. Migrating birds make their way north from wintering grounds in the south to breeding grounds in the north, and no matter where you are you can see this migration in action. Every day brings new arrivals and new sightings, and the flood of birds can be overwhelming at times.

If you’re lucky enough to be able to travel to a place like Gray’s Harbor in Washington state, Cheyenne Bottoms in Kansas, or Delaware Bay in the east, you can see hundreds of thousands of migrating shorebirds as they stop for a few weeks to refuel on their way to the arctic. Along the Gulf Coast beaches you can see birds that have just flown from the Yucatan or from South America and are dropping into the nearest patch of cover to rest. Even in urban areas--places like Central Park in New York City, Rock Creek Park in Washington DC, Golden Gate Park in San Francisco, and countless other parks in cities and towns across North America--you will find outstanding birding. During spring migration these natural oases can be filled with brightly-colored songbirds, and seeing an exotic bird like a Blackburnian Warbler or a Western Tanager, where there were none the day before, is a thrill unique to birding. You don’t even have to travel. Whether you’re a seasoned birder or a neophyte, just grab some binoculars and a bird guide, and head out to your backyard, or to your local park or beach to see what’s happening. Those warm spring days when all you want to do is take a long lunch break and sprawl out on the lawn are the same days that the birds will be migrating north, and all you have to do is look up.
--David Allen Sibley

"David Sibley's new Field Guide to Birds is stunning. If God is in the details, then this new bird book is inspired. Sibley's illustrations are a labor of love born out of a lifetime of acute observation and passion. His attention to subtleties could only have been noted by watching each species of bird in the field over time. It is this kind of aesthetic and deep patience that makes each page a visual delight. Call the Sibley Guide an ecological testament to the majesty of birds in all their variations. I can hardly wait to take this book in hand and go birding with new eyes."
-- Terry Tempest Williams

THE SIBLEY GUIDE TO BIRDS