Items related to Light in August 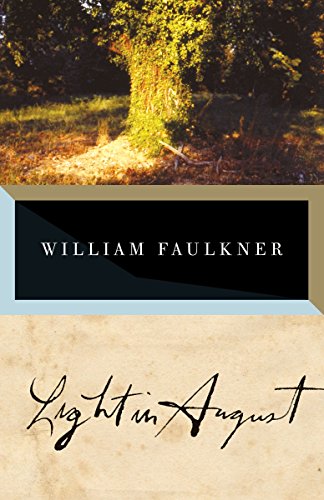 “Read, read, read. Read everything—trash, classics, good and bad, and see how they do it. Just like a carpenter who works as an apprentice and studies the master. Read! You’ll absorb it. Then write. If it is good, you’ll find out. If it’s not, throw it out the window.” —William Faulkner

Light in August, a novel about hopeful perseverance in the face of mortality, features some of Faulkner’s most memorable characters: guileless, dauntless Lena Grove, in search of the father of her unborn child; Reverend Gail Hightower, who is plagued by visions of Confederate horsemen; and Joe Christmas, a desperate, enigmatic drifter consumed by his mixed ancestry.

Joe Christmas does not know whether he is black or white. Faulkner makes of Joe's tragedy a powerful indictment of racism; at the same time Joe's life is a study of the divided self and becomes a symbol of 20th century man.

“For all his concern with the South, Faulkner was actually seeking out the nature of man. Thus we must turn to him for that continuity of moral purpose which made for the greatness of our classics.” —Ralph Ellison

Book Description Paperback. Condition: New. Excellent condition. Interior is tight, bright and clean; no underlining, notes or highlighting. Binding is smooth and solid. Paperback cover is clean and sticker free. Minor scuffing and/or corner bumps on the paperback covers due to shelf wear. 100% Satisfaction Guaranteed. All items are carefully enclosed with bubble wrap. We ship promptly and worldwide via US Post and will email you a tracking number. Seller Inventory # SKU0063368

Light in August: The Corrected Text (Paperback or Softback)

Light in August (The Corrected Text)