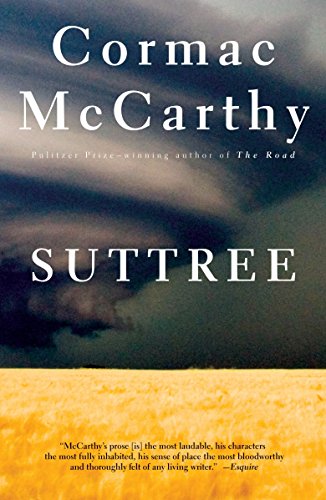 By the author of Blood Meridian and All the Pretty Horses, Suttree is the story of Cornelius Suttree, who has forsaken a life of privilege with his prominent family to live in a dilapidated houseboat on the Tennessee River near Knoxville.  Remaining on the margins of the outcast community there--a brilliantly imagined collection of eccentrics, criminals, and squatters--he rises above the physical and human squalor with detachment, humor, and dignity.

“Suttree contains a humour that is Faulknerian in its gentle wryness, and a freakish imaginative flair reminiscent of Flannery O'Connor.” —The Times Literary Supplement (London)

“All of McCarthy’s books present the reviewer with the same welcome difficulty. They are so good that one can hardly say how good they really are. . . . Suttree may be his magnum opus. Its protagonist, Cornelius Suttree, has forsaken his prominent family to live in a dilapidated houseboat among the inhabitants of the demimonde along the banks of the Tennessee River. His associates are mostly criminals of one sort or another, and Suttree is, to say the least, estranged from what might be called normal society. But he is so involved with life (and it with him) that when in the end he takes his leave, the reader’s heart goes with him. Suttree is probably the funniest and most unbearably sad of McCarthy’s books . . . which seem to me unsurpassed in American literature.” —Stanley Booth
From the Hardcover edition.

Cormac McCarthy was born in Rhode Island in1933 and spent most of his childhood near Knoxville, Tennessee. He served in the U.S. Air Force and later studied at the University of Tennessee. In 1976 he moved to El Paso, Texas, where he lives today.  McCarthy's fiction parallels his movement from the Southeast to the West--the first four novels being set in Tennessee, the last three in the Southwest and Mexico. The Orchard Keeper (1965) won the Faulkner Award for a first novel; it was followed by Outer Dark (1968),  Child of God (1973), Suttree (1979), Blood Meridian (1985), All the Pretty Horses, which won both the National Book Critics Circle Award and the National Book Award for fiction in 1992, and The Crossing.