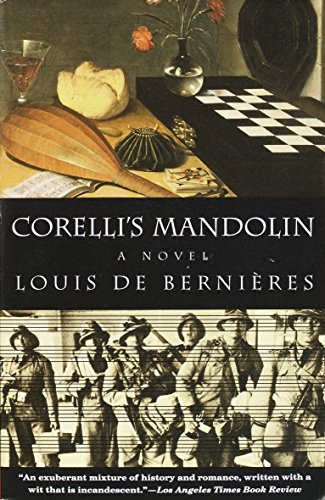 Extravagant, inventive, emotionally sweeping, Corelli's Mandolin is the story of a timeless place that one day wakes up to find itself in the jaws of history.  The place is the Greek island of Cephallonia, where gods once dabbled in the affairs of men and the local saint periodically rises from his sarcophagus to cure the mad.  Then the tide of World War II rolls onto the island's shores in the form of the conquering Italian army.

Caught in the occupation are Pelagia, a willful, beautiful young woman, and the two suitors vying for her love:  Mandras, a gentle fisherman turned ruthless guerilla, and the charming, mandolin-playing Captain Corelli, a reluctant officer of the Italian garrison on the island.  Rich with loyalties and betrayals, and set against a landscape where the factual blends seamlessly with the fantastic, Corelli's Mandolin is a passionate novel as rich in ideas as it is genuinely moving.

In the early days of the Second World War, before Benito Mussolini invaded Greece, Dr. Iannis practices medicine on the island of Cephalonia, accompanied by his daughter, Pelagia, to whom he imparts much of his healing art. Even when the Italians do invade, life isn't so bad--at first anyway. The officer in command of the Italian garrison is the cultured Captain Antonio Corelli, who responds to a Nazi greeting of "Heil Hitler" with his own "Heil Puccini," and whose most precious possession is his mandolin. It isn't long before Corelli and Pelagia are involved in a heated affair--despite her engagement to a young fisherman, Mandras, who has gone off to join Greek partisans. Love is complicated enough in wartime, even when the lovers are on the same side. And for Corelli and Pelagia, it becomes increasingly difficult to negotiate the minefield of allegiances, both personal and political, as all around them atrocities mount, former friends become enemies, and the ugliness of war infects everyone it touches.

British author Louis de Berničres is well known for his forays into magical realism in such novels as The War of Don Emmanuel's Nether Parts, Seńor Vivo and the Coca Lord, and The Troublesome Offspring of Cardinal Guzman. Here he keeps it to a minimum, though certainly the secondary characters with whom he populates his island--the drunken priest, the strongman, the fisherman who swims with dolphins--would be at home in any of his wildly imaginative Latin American fictions. Instead, de Berničres seems interested in dissecting the nature of history as he tells his ever-darkening tale from many different perspectives. Corelli's Mandolin works on many levels, as a love story, a war story, and a deconstruction of just what determines the facts that make it into the history books. --Alix Wilber

"Brims with all the grand topics of literature--love and death, heroism and skull-duggery, humor and pathos, not to mention art and religion. . . . A good old-fashioned novel." --Washington Post Book World

"An exuberant mixture of history and romance, written with a wit that is incandescent"--Los Angeles Times Book Review

Book Description Paperback. Condition: New. Carefully packaged and shipped within 24 hours! Most CDs and books have multiple editions; if you want a specific edition please ask via email.Book is in perfect condition and will be SHIPPED WITHIN 24 hours of receiving the order!. Seller Inventory # BX20-0134