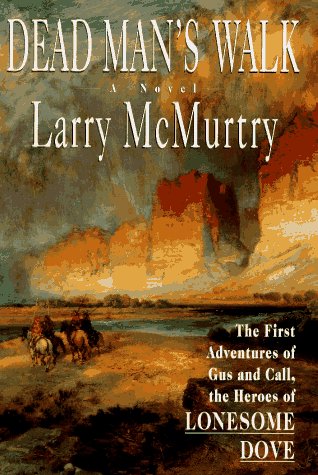 In the prequel to the Pulitzer Prize-winning Lonesome Dove, young Texas Rangers Woodrow Call and Gus McCrae confront the perils of the western wilderness, from the Rangers' ill-fated attempt to take Santa Fe to their desperate trek across the Jornada del Muerto. 500,000 first printing.

Review:
In this prequel to McMurtry's 1986 Pulitzer Prize-winning Lonesome Dove, Gus McCrae and Woodrow Call are invincible young bucks, Texas Rangers, full of youthful energy and, quite frankly, full of themselves. That is until they're utterly consumed by the vicious battlefield of the early-19th-century Wild West. Their journey takes them across barren deserts and raging rivers and through steep and snowy mountains, often on foot and with barely enough provisions and clothing to keep them from certain death. The constant threat of attack by Comanches keeps them awake nights, fearing for their lives--and for good reason. "Buffalo Hump reached down and grabbed the terrified boy by his long black hair. He yanked his horse to a stop, lifted Zeke Moody off his feet, and slashed at his head with a knife, just above the boy's ears. Then he whirled and raced across the front of the huddled Rangers, dragging Zeke by the hair. As the horse increased its speed, the scalp tore loose and Zeke fell free. Buffalo Hump had whirled again, and held aloft the bloody scalp."

This bedraggled group of adventurers--on their foolhardy expedition to seize Santa Fe from the Mexicans (who also prove to be formidable enemies)--includes a salty assortment of cowboys, scouts, fortune seekers, and a fat and sassy whore nicknamed "The Great Western." McMurtry's adept storytelling paints a portrait of the Wild West that at times is palpable. One can almost smell the campfires, the body odors, and the long-awaited piece of meat after weeks without a proper meal. Dead Man's Walk will satisfy your craving for adventure, without having to put your life on the line.

About the Author:
Larry McMurtry is the author of twenty-nine novels, including the Pulitzer Prize-winning Lonesome Dove. His other works include two collections of essays, three memoirs, and more than thirty screenplays, including the coauthorship of Brokeback Mountain, for which he received an Academy Award. He lives in Archer City, Texas.