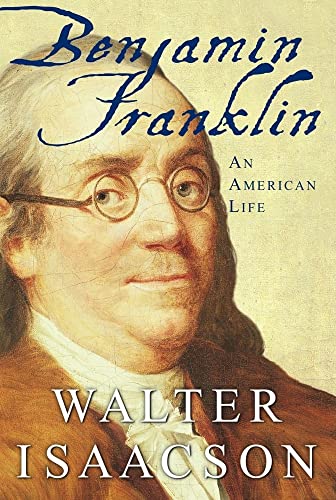 In this authoritative and engrossing full-scale biography, Walter Isaacson, bestselling author of Einstein and Steve Jobs, shows how the most fascinating of America's founders helped define our national character.

Benjamin Franklin is the founding father who winks at us, the one who seems made of flesh rather than marble. In a sweeping narrative that follows Franklin’s life from Boston to Philadelphia to London and Paris and back, Walter Isaacson chronicles the adventures of the runaway apprentice who became, over the course of his eighty-four-year life, America’s best writer, inventor, media baron, scientist, diplomat, and business strategist, as well as one of its most practical and ingenious political leaders. He explores the wit behind Poor Richard’s Almanac and the wisdom behind the Declaration of Independence, the new nation’s alliance with France, the treaty that ended the Revolution, and the compromises that created a near-perfect Constitution.

In this colorful and intimate narrative, Isaacson provides the full sweep of Franklin’s amazing life, showing how he helped to forge the American national identity and why he has a particular resonance in the twenty-first century.

Benjamin Franklin, writes journalist and biographer Walter Isaacson, was that rare Founding Father who would sooner wink at a passer-by than sit still for a formal portrait. What's more, Isaacson relates in this fluent and entertaining biography, the revolutionary leader represents a political tradition that has been all but forgotten today, one that prizes pragmatism over moralism, religious tolerance over fundamentalist rigidity, and social mobility over class privilege. That broadly democratic sensibility allowed Franklin his contradictions, as Isaacson shows. Though a man of lofty principles, Franklin wasn't shy of using sex to sell the newspapers he edited and published; though far from frivolous, he liked his toys and his mortal pleasures; and though he sometimes gave off a simpleton image, he was a shrewd and even crafty politician. Isaacson doesn't shy from enumerating Franklin’s occasional peccadilloes and shortcomings, in keeping with the iconoclastic nature of our time--none of which, however, stops him from considering Benjamin Franklin "the most accomplished American of his age," and one of the most admirable of any era. And here’s one bit of proof: as a young man, Ben Franklin regularly went without food in order to buy books. His example, as always, is a good one--and this is just the book to buy with the proceeds from the grocery budget. --Gregory McNamee

Walter Isaacson, University Professor of History at Tulane, has been CEO of the Aspen Institute, chairman of CNN, and editor of Time magazine. He is the author of Leonardo da Vinci; The Innovators; Steve Jobs; Einstein: His Life and Universe; Benjamin Franklin: An American Life; and Kissinger: A Biography, and the coauthor of The Wise Men: Six Friends and the World They Made. Facebook: Walter Isaacson, Twitter: @WalterIsaacson

Shipping: US$ 12.64
From United Kingdom to U.S.A.
Destination, rates & speeds