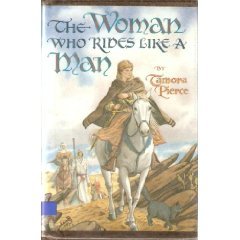 On her first tour as a knight errant, Alanna assumes a position of influence with a fierce desert tribe, makes some changes in the role of women in the society, and continues her own emotional development.

last, Alanna of Trebond heads out to seek adventure in the desert of Tortall. Captured by desert tribesmen, she is forced to prove herself in a magical duel to the death. But her real challenge doesn't come until after she wins. As the first female shaman, Alanna must fight to change the ancient traditions of the stubborn desert tribes -- for their own sake and for the sake of all Tortall.

This third book in the Song of the Lioness quartet continues Alanna's saga as she strikes out alone and discovers herself anew.

"Lively and enjoyable, with a strong, vigorous heroine."--The Horn Book

1. The Woman Who Rides Like A Man (The Song of the Lioness)