Items related to Alice's Adventures in Wonderland: A Pop-up Adaptation 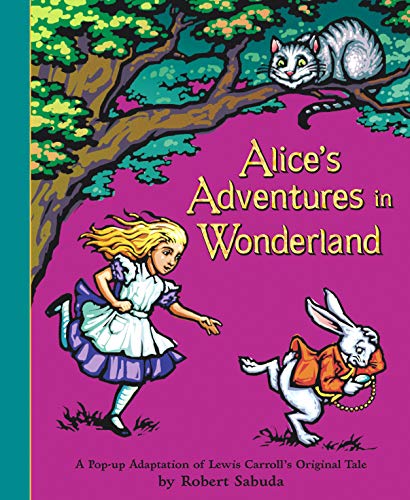 Alice's Adventures in Wonderland is Robert Sabuda's most amazing creation ever, featuring stunning pop-ups illustrated in John Tenniel's classic style. The text is faithful to Lewis Carroll's original story, and special effects like a Victorian peep show, multifaceted foil, and tactile elements make this a pop-up to read and admire again and again.

Charles Lutwidge Dodgson, better known by his pen name Lewis Carroll, was an English writer, mathematician, logician, and photographer. He is especially remembered for bringing to life the beloved and long-revered tale of Alice in Alice's Adventures in Wonderland (1865) and its sequel Through the Looking-Glass (1871).

Robert Sabuda is one of the most innovative and inventive children's book creators and is known worldwide for his amazing pop-up paper engineering. His books include Alice's Adventures in Wonderland, The Wonderful Wizard of Oz, The Twelve Days of Christmas, The Night Before Christmas, The Winter's Tale, Peter Pan, Beauty and the Beast, to name but afew, have garnered numerous awards and have made the New York Times bestseller lists on many occasions. He lives in New York City.

What is it about Alice? This season two well-known children's book creators have tackled the challenge of shoehorning Alice's Adventures in Wonderland into pop-up books only six spreads long. Larded with dioramas, flaps, and other displays of paste-and-paper bravura, both versions are likely to create buzz among Alice collectors and aficionados of movable books. But the two renditions of the same story could hardly be more different.

Seibold's "super dimensional" Alice, which he both designed and illustrated, plunges children into a psychedelic universe straight out of the Jefferson Airplane's "White Rabbit." It features Carroll's original text in brief, cherry-picked excerpts, so the finished product is more a series of interpretive highlights than a thorough presentation of the story, and the rococo, tough-to-decipher typeface adds to the impression that the book is meant to be viewed, not read. Seibold's trademark palette of beiges and pea greens, and a slightly grotesque Alice with Ronald McDonald clown feet, seem to dare readers to prefer Disney's prettiness or Tenniel's Victorian placidity. The pops conceived by Seibold and paper engineer James R. Diaz are a lot of fun. Each spread contains a dizzying array of devices and effects, including a particularly clever rendering of the vanishing Cheshire cat. In the end, however, all of this somehow seems less the point than the book's air of hipster irony.

The version by Sabuda, creator of a previous pop-up adaptation of a classic, The Wonderful Wizard of Oz (2000), cleaves more closely to the original; its full-color artwork is "in John Tenniel's classic style," and the abridged text, cleverly tucked into minibooks on each spread, is fairly comprehensive. It's also the more successful of the two, partly because this faithfulness preserves the contrast between the drawing-room politeness of Tenniel's illustrations and the lunacy of Carroll's imaginings. Where the pops in Seibold's version creak open a bit grudgingly and sometimes need a hand from the reader to work properly, Sabuda's don't pop so much as gracefully unfurl--and then collapse upon themselves with jaw-dropping ease that leaves one flipping the pages back and forth in amazement. Few readers will peep through the expandable tube that simulates Alice's tumble down the rabbit hole, or admire the closing spread's intricately die-cut, gravity-defying arc of playing cards, without feeling a bit bereft when the adventure comes to an end. This will very likely come to be seen as the definitive pop-up version of Alice, but it will also further establish Sabuda as the foremost visionary of the genre. REVWR
Copyright © American Library Association. All rights reserved