Items related to The I Ching, or, Book of Changes (Bollingen Series... 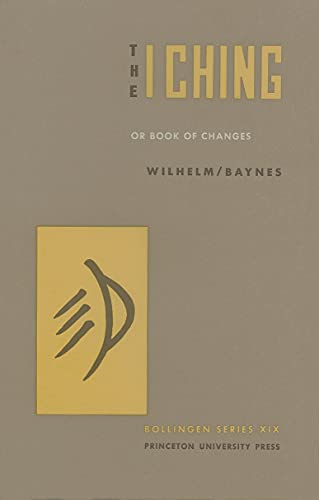 The I Ching, or Book of Changes, a common source for both Confucianist and Taoist philosophy, is one of the first efforts of the human mind to place itself within the universe. It has exerted a living influence in China for 3,000 years, and interest in it has been rapidly spreading in the West.

More than just a translation, Richard Wilhelm's I Ching is a profound introduction to the Chinese world-view. The I Ching (Yi Jing) is recognized by both Confucians and Taoists as a foundational work, and Wilhelm shows why. He separates his work into three books. The first book is about the hexagrams--the meanings of the lines and Wilhelm's extensive comments. The second presents two early commentaries that interpret the wisdom of the divinatory text, also with Wilhelm's helpful notes. And the third book takes us back to the hexagrams for more detailed commentary from both ancient Chinese thinkers and Wilhelm. Wilhelm is able to offer such enormous assistance because he spent the better part of a decade in China studying under classically trained scholars. His love for the work is thus as broad as his understanding.

The I Ching was originally used for divination, kind of like palm reading or interpreting the stars. It differs from simple prognostication, however, in that it demands us, as diviners, to cultivate an understanding of the world and ourselves. Without this understanding, the text is useless, hence the value of the commentaries, particularly Wilhelm's. This version is not without its biases, of course--it is a European's understanding of the I Ching, through a late-Qing dynasty Confucian perspective, translated into English by a Jungian psychoanalyst. Nonetheless, it succeeds like no other. --Brian Bruya

"Princeton's Bollingen edition--still regarded as the best and most authentic by I Ching aficionados." (The New York Times Book Review)

The I Ching or Book of Changes (Hardcover)