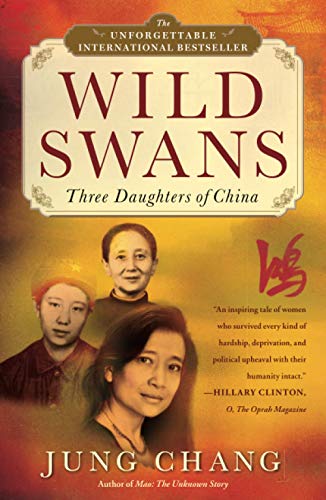 The story of three generations in twentieth-century China that blends the intimacy of memoir and the panoramic sweep of eyewitness history—a bestselling classic in thirty languages with more than ten million copies sold around the world, now with a new introduction from the author.

An engrossing record of Mao’s impact on China, an unusual window on the female experience in the modern world, and an inspiring tale of courage and love, Jung Chang describes the extraordinary lives and experiences of her family members: her grandmother, a warlord’s concubine; her mother’s struggles as a young idealistic Communist; and her parents’ experience as members of the Communist elite and their ordeal during the Cultural Revolution. Chang was a Red Guard briefly at the age of fourteen, then worked as a peasant, a “barefoot doctor,” a steelworker, and an electrician. As the story of each generation unfolds, Chang captures in gripping, moving—and ultimately uplifting—detail the cycles of violent drama visited on her own family and millions of others caught in the whirlwind of history.

In Wild Swans Jung Chang recounts the evocative, unsettling, and insistently gripping story of how three generations of women in her family fared in the political maelstrom of China during the 20th century. Chang's grandmother was a warlord's concubine. Her gently raised mother struggled with hardships in the early days of Mao's revolution and rose, like her husband, to a prominent position in the Communist Party before being denounced during the Cultural Revolution. Chang herself marched, worked, and breathed for Mao until doubt crept in over the excesses of his policies and purges. Born just a few decades apart, their lives overlap with the end of the warlords' regime and overthrow of the Japanese occupation, violent struggles between the Kuomintang and the Communists to carve up China, and, most poignant for the author, the vicious cycle of purges orchestrated by Chairman Mao that discredited and crushed millions of people, including her parents.

"This is a powerful, moving, at times shocking account of three generations of Chinese women, as compelling as Amy Tan." --Mary Morris.

"An evocative, often astonishing view of life in a changing China." -- The New York Times