Items related to A Chancer 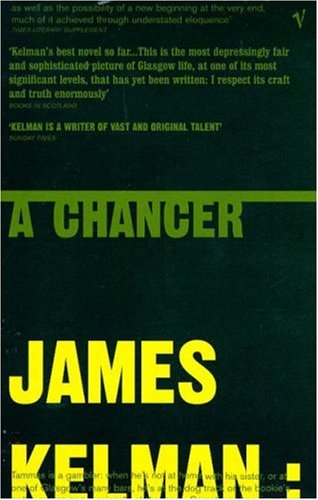 Tammas is 20, a loner and a compulsive gambler. Unable to hold a job for long, his life revolves around Glasgow bars, living with his sister and brother-in-law, betting shops, and casinos. Sometimes Tammas wins, more often he loses. But gambling gives him as good a chance as any of discovering what he seeks from life since society offers no prospect of a more fulfilling alternative.

James Kelman was born in Glasgow in 1946. After leaving school at 15 he worked in the printing industry and as a bus driver. In 1971 he attended creative writing night classes and in 1973 an American company published his first collection of short stories, An Old Pub Near the Angel. Greyhound for Breakfast won the 1987 Cheltenham Prize; A Disaffection won the James Tait Black Memorial Prize and was shortlisted for the Booker Prize; How Late It Was, How Late won the 1994 Booker Prize amidst a storm of controversy. He has also written many plays for stage and radio. He lives in Glasgow with his wife and family.

Book Description Paperback. Condition: Good. Connecting readers with great books since 1972. Used books may not include companion materials, some shelf wear, may contain highlighting/notes, may not include cdrom or access codes. Customer service is our top priority!. Seller Inventory # S_307014285

Book Description Paperback. Condition: Very Good. The book has been read, but is in excellent condition. Pages are intact and not marred by notes or highlighting. The spine remains undamaged. Seller Inventory # GOR005266333

Book Description Paperback. Condition: Good. The book has been read but remains in clean condition. All pages are intact and the cover is intact. Some minor wear to the spine. Seller Inventory # GOR004054625

Book Description Paperback. Condition: Fair. A readable copy of the book which may include some defects such as highlighting and notes. Cover and pages may be creased and show discolouration. Seller Inventory # GOR005448633