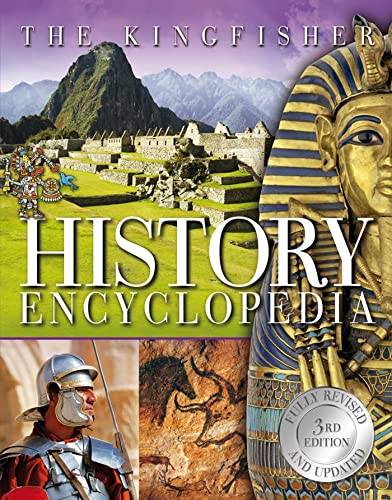 Kingfisher's encyclopedias are award-winning, information-packed reference books for all the family. The new, updated editions are beautiful versions of these trusted favorites--perfect for gifts and reference alike. If you want one history encyclopedia, this is it!

History leaps from the page in this completely revised and updated edition of the critically acclaimed Kingfisher History Encyclopedia by the editors at Kingfisher. From man's earliest history right through to the technological and social revolutions of the current day, this trusted reference provides a one-stop source for research, and is the perfect companion to any study of world history. The encyclopedia is organized chronologically and then thematically within each time period. A timeline runs across the top of each page for context. Each section includes biographies of important people and key features on the art, architecture, and technology of the period. No more hunting and pecking all over the internet for incomplete or un-vetted information. With 3,500 indexed references and more than 2,000 full-color illustrations, photographs, and source materials, as well as research-friendly back matter and index, this encyclopedia provides a beautiful, authoritative reference that is essential for any home, school, or library.

This edition of The Kingfisher History Encyclopedia features minor updates to the 2004 revision. The text begins with an introduction and an explanation of what is history. The content is arranged chronologically in 10 sections, from The Ancient World (40,000–500 BC) to The Modern World (1950–Present Day), and then thematically within each of the time periods. Each section starts with an At a Glance entry, offering a brief overview of the time period via a global map and boxed areas highlighting key events on the various continents. Succeeding entries appear on a single or double-page spread. All of the sections, except for The Modern World, conclude with entries on The Arts, Architecture, and Science and Technology. (The Modern World section concludes with an entry on the War on Terror.) A time line indicating the appropriate time period runs along the top of each page spread and will be helpful for students in tracking places and events. Many entries feature boxed areas highlighting key dates. This text offers a global perspective. Shoguns and Samurai; Venice; Aztecs and Incas; and The Khmer Empire are some of the subjects covered in the section on the Middle Ages. The visually appealing layout includes color images, such as photographs and maps, on every page and features annotations that offer detailed information. The updates in this edition include mention of the execution of Saddam Hussein and the killing of Osama Bin Laden as well as the inclusion of terrorist attacks occurring since the previous edition. The book concludes with an index, acknowledgments, and a “Ready Reference” section, which offers listings of various dynasties, rulers, and popes, followed by a chronological listing of major wars and a brief list of Internet links for further research. This updated edition would be useful as a homework support for school and public libraries, especially those that own the previous edition. In addition, its appealing and colorful layout and accessible information will lend it to casual browsing by students and adults. Grades 5-12. --Maren Ostergard