Items related to The Dodger: The Extraordinary Story of Churchill's...

The Dodger: The Extraordinary Story of Churchill's American Cousin, Two World Wars, and The Great Escape 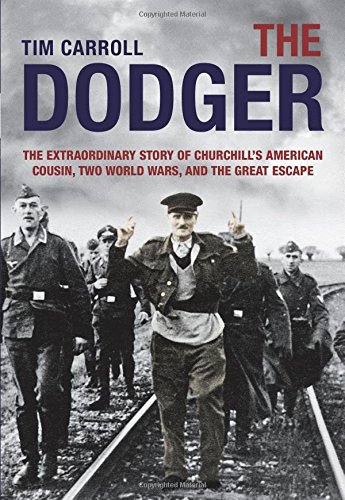 Of all the Allied prisoners who broke out of Hermann Göring's "escape proof" camp in the famous "Great Escape" of March 1944, Johnny Dodge was the most intriguing.

“The escapers lowered themselves one by one into the narrow opening of the tunnel. James and Dowse went first, followed by Churchill and Wings. Johnny was last, pulling the trap door behind him as he squeezed his bulky form down into the gloom. . . . “Their progress along the impossibly narrow tunnel was far from easy.. . . It was a terrifying experience, Wings admitted later. Much to his relief and after what seemed an interminable journey, he and Churchill finally scrambled out of the exit hatch into the open and the refreshing September breeze. “For Johnny the experience was even worse. He was half as big again as any of the other men and so the tunnel seemed even more tortuously constricting. His progress was slow and laborious. Finally . . . he became stuck, this time halfway out of the exit hole. He could only manage to get his head out and one hand while his other hand trailed behind him clinging on to his bag of provisions.” —From The Dodger

Tim Carroll is a newspaper journalist and television producer. He is the author of The Great Escapers: The Full Story of the Second World War's Most Remarkable Mass Escape and was co-author of In Hitler's Bunker: A Boy Soldier's Eyewitness Account of the Führer's Last Days.

1. The Dodger: The Extraordinary Story of Churchill's American Cousin, Two World Wars, and The Great Escape

3. THE DODGER: THE EXTRAORDINARY ST

4. The Dodger: The Extraordinary Story of Churchill's American Cousin, Two World Wars, and The Great Escape