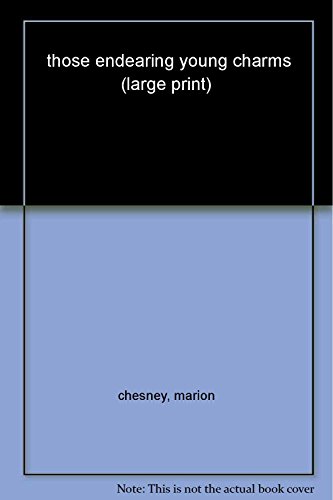 â I have my pride. I have sworn to marry the girl, and marry her I will.â

After ten long years, the Earl of Devenham had returned to wed Mary Anstey, only to find that their feelings for each other had cooled off considerably. Nevertheless, they both put on bright faces for the benefit of family and friends.

But Maryâ s younger sister Emily saw through their masquerade. She would sacrifice anything rather than see her retiring sister married to the now haughty earl.

Desperate measure were called forâ ¦ a sleeping draught in Maryâ s wedding-morning chocolate and Emily could don the veil and force an annulment with the trick was discovered.

It was the kind of plot that could â and would â get young Emily into troubleâ ¦.

Lovers are joined by force - by family pressure, by societal pressure, and cultural mores, but Chesneyâ s heros and heroines never seem to want to give up on their search for the real thing. They are willing to go through almost anything in their hunt to find love - theyâ ll jump through hoops to avoid the tricks of outsiders who thrust them together for fortune (that doesnâ t exist), theyâ ll dance their way into the hearts of the most eligible bachelors using all of their charms, and if it takes even lessons in love (the title of one of these page turners) then so be it. The Love Series is all about love in its various forms, from lukewarm to searing hot and weâ re along for the ride.

From 1977 to the early 1990s, Marion Chesney wrote over one hundred romance novels. Now writing as M. C. Beaton, she is the bestselling award-winning author of two internationally successful mystery series - HAMISH MACBETH and AGATHA RAISIN. She lives in the United Kingdom.

M. C. Beaton ('aka' Marion Chesney) has won international acclaim for her bestselling Hamish Macbeth mysteries and the Agatha Raisin mystery series. She is also the author of more than one hundred romance titles and a series of romantic suspense novels, the Edwardian Mystery series. Born in Scotland, she now divides her time between Paris and the English Cotswolds.

This Regency romance begins with the Earl of Devenham returning home after 10 years of war to claim the hand of Mary Anstey, whose family spurned him when he was a young and untitled soldier. But Mary's sister Emily, an avid reader of romances, is determined that her sister shall not suffer a loveless marriage, and she vows to sacrifice herself instead. A drop of laudanum in Mary's chocolate on the morning of the wedding, a brown wig and a heavy veil, and a switch is accomplished at the altar, with Emily blithely assuming the marriage will be annulled as soon as the dupe is discovered. But the earl has his pride, and Emily is stuck in a marriage with a husband who detests her. Worse, she realizes that she is gradually falling in love with him. The dei ex machina are a gossip-mongering former mistress and an interfering cat named Peter, apt choices in a book that is as light as a powderpuff and twice as fluffy.
Copyright 1986 Reed Business Information, Inc.